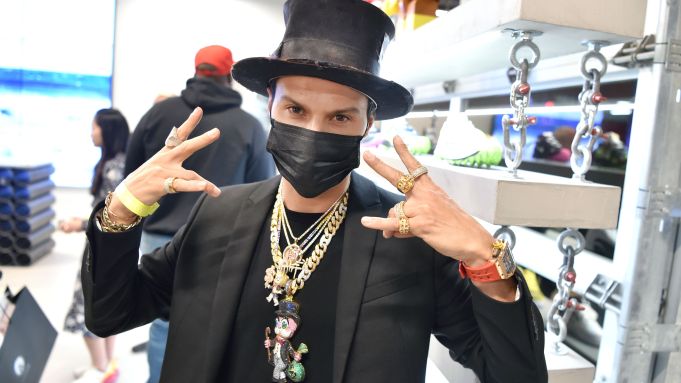 The lawn chairs stretched down the block outside of the new Unknwn boutique in Miami’s Wynwood neighborhood. The reason for the lineup?

“A whole bunch of sneakers — I don’t know,” said one of the people seated and waiting, most likely a paid line holder rather than a bonafide sneakerhead given the lack of enthusiasm.

“Yeah, I’m a sneakerhead,” said Alec Monopoly from inside the store’s opening-night party, where VIP guests including Timbaland, Flo Rida, and Christian Combs had first access to the shelves of shoes and racks of clothing. “They’ve got the new Air Force 1’s that just came out with the cool things on them. I’m up on all the new sneakers that come out, and I wanted to get a pair so I came through. They’ve got a great selection of shoes, this place is really cool. Wynwood needed a place like this, so I’m happy they’re here.”

The boutique landed in the neighborhood on the 10th anniversary of Wynwood Walls, a public outdoor arena for graffiti started by Jessica Goldman Srebnick.

“You hear 10 years, but I’ve been painting here for almost 15 years. So it’s 10 years of it being officially Wynwood, but this has been going on for even almost 20 years,” said the artist. “So just happy to be a part of it, I love it here. Whatever I can do to contribute, I do it.”

Alec Monopoly is in the class of street artists embraced by luxury fashion, having collaborated with Tag Heuer for several years. Several pioneers for the graffiti genre, lesser known within fashion circles, were across the street at the Museum of Graffiti’s opening, toting around books of archival photos and talking about the old days — the early Seventies — to anyone interested in hearing about it.

“Before, it was considered vandalism; now it’s considered art. So that’s what’s changed,” said Alec Monopoly of the shift in commercial demand. “It’s amazing that these guys get recognition because they’re the OG’s, and they’re finally getting the recognition they deserve.”

The store had a few unexpected guests, too, most notably the City of Miami Police, who doled out high-fives, browsed the shoe selection, and posed for photos with RRR123 founder Rivington roi Rebis, whose second collection is on sale in the boutique.

“He’s the chief,” explained Rebis of the squad’s presence. “I’m trying to do something with kids here in Miami with them — something with the kids in terms of design, screen prints.”

Flo Rida browsed the racks, but he wasn’t just window shopping; he left with a few bags of new merch.

“I’ve been a fan,” said the rapper of Unknwn. He’s a native of the greater Miami area, and recognizes the significance of the development of Wynwood. “It’s amazing, I love the fact that the whole art culture’s here in Wynwood, and aside from that it’s just more places for travelers around the world to come enjoy themselves, great food, great people,” he said.

“To see Wynwood open up, it’s so culturally relevant, so many movements are happening here,” said Unknwn’s Jaron Kanfer, standing next to co-owner Frankie Walker Jr., both Ohio childhood friends of LeBron James (who wasn’t able to make it due to his basketball schedule — someone should have told him there’s a basketball court in the store’s courtyard.) “We wanted to do something on a larger level, and we saw Wynwood being a perfect fit. It’s the perfect timing for us here; we felt like it was the perfect platform for us as far as fashion, art, music.”

And based on the queue already waiting outside, they hit the mark, because they were waiting for more than just a singular shoe.

Chloé Hosts Dinner for Lara Favaretto at The Bass