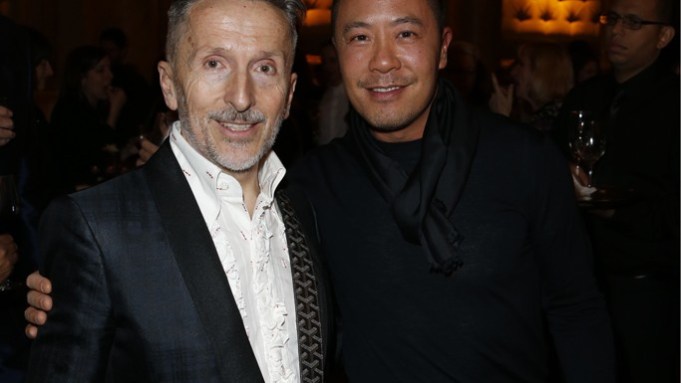 NEW YORK — Women were front and center Thursday night at Legal Momentum’s Equal Opportunity Awards Dinner, and so, too, were some of fashion’s biggest names.

The event, which was held here at Capitale restaurant on the Lower East Side, kicked off with some choice remarks about gender roles from Barneys creative ambassador Simon Doonan, who was the emcee for the night.

“My grandfather believed that women did not belong in the workplace but, to put that in context, he also believed that you could catch venereal disease from wearing other people’s shoes,” Doonan said.

“What’s my point? My point is that men are idiots and that women are smart, creative, problem solving, glamorous fabulous, overachieving and genius.”

Doonan, whose mother ran away from home to join the Royal Air Force to become an electrician, spoke of the importance of women as leaders in society and of the role his mother played in his life.

“It’s a great honor for me to receive this award that has Etta Froio’s name on it,” Lee said of the longtime former WWD editor who retired earlier this year. “Etta is truly one of the greatest people in the industry. When she first approached me some time ago, it was absolutely impossible to say no to Etta and when I learned more about this organization, I was thrilled to be a part of this evening.”

Although Legal Momentum is geared toward advancing women and girls, Lee found a point of commonality with the cause.

“I grew up as a gay teenager in San Francisco in the 1970s. I was lucky by geography, lucky by time, lucky by my very liberal mother and my grandparents where none of these facts were an issue,” Lee said. “I never really faced any glass or pink ceiling of any kind. I’ve managed to escape discrimination or limits in my career, but I realize that not everyone is as fortunate and as lucky as I’ve been, and I recognize that women in particular still face many imbalances in the workplace. I have to thank my mother, I knew those things, they were instilled in me and I didn’t have to ask anyone to bring binders to know that.”

That jab at Mitt Romney’s “binders full of women” line drew applause, as did Lee’s recognition of women at Barneys. At the executive level, women outrank men 59 percent to 41 percent, he noted.

Another champion of women, von Furstenberg, took the stage, adding: “When I was growing up, I wasn’t sure what I wanted to do but I knew the kind of woman I wanted to be.” Through fashion and her philanthropic work, von Furstenberg said her life’s “mission is to empower women.”

With that, the ever-charming designer introduced her friend Talley, who, when accepting his award, also gave Froio a shout out, adding that she was his “favorite editor” when he worked for WWD in the Seventies.

Vogue’s contributing editor at large also spoke of his own family and the important role his grandmother played in his life and in his career. Talley talked about the similarities between his grandmother and former Vogue editor in chief Diana Vreeland.

“I learned early how wonderful women are and what they give to the world,” said Talley, who wrapped up his speech to a warm wave of applause and a peck on the cheek from von Furstenberg.