The former Bloomingdale’s chairman was given the Etta Froio Equal Opportunity Award at the cause's annual fund-raiser on Wednesday. 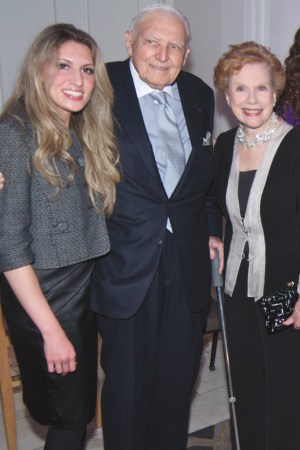 When it comes to women advancing in retail, “there’s been progress, but not enough,” said Marvin Traub, president of Marvin Traub Associates and the former Bloomingdale’s chairman.

Traub discussed the discrimination issue after receiving the Etta Froio Equal Opportunity Award at the Legal Momentum fund-raiser Wednesday at the Grand Hyatt. A crowd of 250 raised $300,000 for the cause, and recognized Traub’s support for talent, regardless of gender, during his long career. Next year, Mark Lee, chief executive officer of Barneys New York, and Diane von Furstenberg will receive the Etta Froio Equal Opportunity Award.

“I’m really proud of my father,” said Traub’s son Andrew, who came with a large contingent of the family. “He was ahead of his time supporting women. He has always hired people based on their abilities.”

“Women have made major progress moving beyond the buyer level to more senior levels,” the elder Traub said. “Yet when I look at women who are ceo’s, there are none at the major department stores. There is Angela Ahrendts, ceo at Burberry, and Trudy Sullivan at Talbots and Rose Marie Bravo was once president of Saks and Sue Kronick was vice chairman of Macy’s. But there are very few women who are ceo’s. That’s an opportunity.”

Similarly, Elizabeth Grayer, president of Legal Momentum, sees the progress and wants more. “Women in this country are visibly succeeding,” Grayer said, adding that the courts and police are more sensitive to domestic violence, an increasing number of women are holding senior positions and laws against discrimination are on the books. “But beyond all the successes, the work is just not finished. There is still enormous gender segregation in this country. Poverty is a women’s issue in this country. More women [than men] are likely to be living below the poverty line. Women still make up less than 18 percent of those elected to the House of Representatives and only six governors are women.”

“Sexual violence is at epidemic proportions. Once every two minutes, a woman is sexually assaulted in this country,” said Rikki Klieman, author and former anchor of Court TV, who served as emcee for the event.

Beyond battling to get the legal system to combat violence against women, “it is a much larger battle to change attitudes,” observed Linda Fairstein, the former sex crimes prosecutor and a best-selling author. Fairstein, along with Linda Addison, Fulbright & Jaworski LLP partner in charge, and Lauren Anderson of the Federal Bureau of Investigation, and Douglas R. Conant, former CEO of Campbell Soup Co., also received Equal Opportunity Awards.