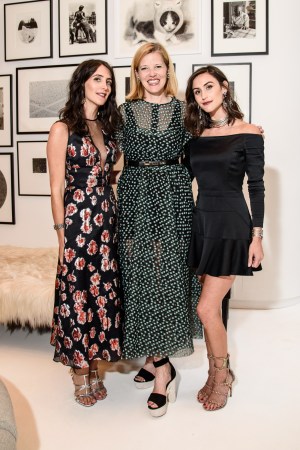 By now, guests know that when an invitation for dinner at Lela Rose’s TriBeCa town home pops up in their inbox, they should probably clear their schedules. The designer, who released her entertaining book, “Pret-A-Party,” in September, is known for her love of themed bashes held at home, and Thursday night was no exception. She partnered with Dannijo designers Jodie Snyder Morel and Danielle Snyder to throw a Cuban-themed dinner in honor of the Dannijo spring collection, which takes inspiration from the It travel destination of the moment, and in celebration of their partnership with Conscious Cuba, a travel agency aimed at giving travelers an authentic Cuban experience.

“We love Lela, because she’s like the best hostess,” Snyder Morel said. The sisters were introduced to Rose through Questlove, when he was launching his “food salon” project at Eleven Madison Park.

“My sister and I designed our spring collection based on Havana, but we’d never been there,” Snyder Morel continued. “So it was just based on the architecture and the music and movies, and kind of our vision. And instead of doing a traditional fashion show, we decided to take the collection after it was made to Cuba, and have the collection come to life in the environment.”

She finally made it to the island in December with her sister, where they shot the collection. “I hope it doesn’t change too much, because there was something amazing about the beauty of just things being genuine and having history,” Snyder Morel said. “We wanted to see how accurate our idea of Havana was,” Snyder added. “And I actually wrote a poem that I teased out on Instagram, and the last stanza of the poem I finished when we made it to Havana.”

For her part, Rose, who visited the island around seven years ago, was more than game to throw a themed dinner. “You know I love to entertain; you tell me a theme and I’m like ‘Cuba! Ole!’” she said. She’d just returned from Dallas, where she launched her latest project: a bicycle collection. “We have this custom bicycle and we’re selling three of the — they’re pretty dang cute,” she said, as she scooped up her dog Bobbin, who spent the evening gleefully weaving between guests legs, licking the occasional ankle as he went.