The stars of the breakout HBO hit worked the red carpet on Wednesday. 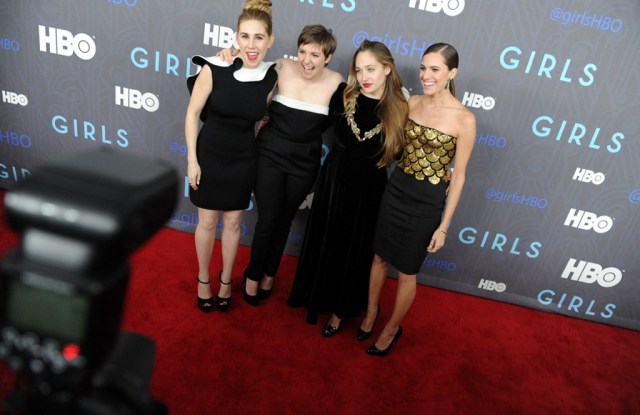 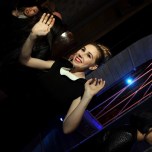 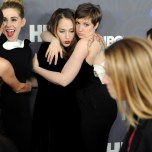 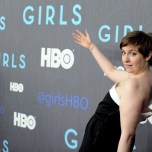 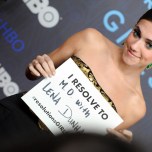 Lena Dunham’s life has changed quite a bit in the year since her breakout hit “Girls” first made its way to premium cable. It should also go without saying that an overnight fan following is something that takes an adjustment period.

“I don’t mind it but I always think its funny when someone approaches you at your exercise class. It’s literally the worst moment to be seen,” said Dunham at the HBO- and Cinema Society-hosted premiere of the show’s second season on Wednesday night. “It’s like, ‘I’m already feeling as though I might die. I’m fluorescent red but, yes, I’d love to take a picture with you.’”

Dunham, who wore a Valentino jumpsuit, joined cast mates Allison Williams, Zosia Mamet and Jemima Kirke for the screening, held, fittingly, at New York University’s Skirball Center. Curious college kids stood behind barricades, iPhones in hand, trying to catch a glimpse of the cast making their way down the carpet. A handful chain-smoked cigarettes nearby and pretended not care.

“I had these other shoes on earlier. I took one step in them and I was like, ‘Nope, there’s just no way,’” said Williams, who shined in an embroidered bustier top and seamed skirt from Altuzarra, shortly before filing into the theater where guests were treated to season two’s first three episodes. “Comfort is paramount.”

After the screening, partygoers — including Elettra Wiedemann, Solange Knowles, Jonah Hill, Terry Richardson, Lily Kwong and Nora Zehetner — headed over to Capitale, where they were greeted by a Brooklyn Bridge installation, indicating entry into “Girls” turf.

Moroccan poufs were scattered about; vintage chandeliers dangled above, couches were topped with pillows covered with Flight of the Conchords and Passion Pit T-shirts and a bar stationed at the back was constructed out of old school speakers. “It’s official: we’re in Williamsburg,” one partygoer said with an eye roll.

Each Girl held court, in her own corner booth, heavily guarded by HBO staff. One young fan diffidently approached asking for a photograph with Dunham. “Oh my God, sure,” the starlet piped up. “Are you kidding? Of course.” What a girl.