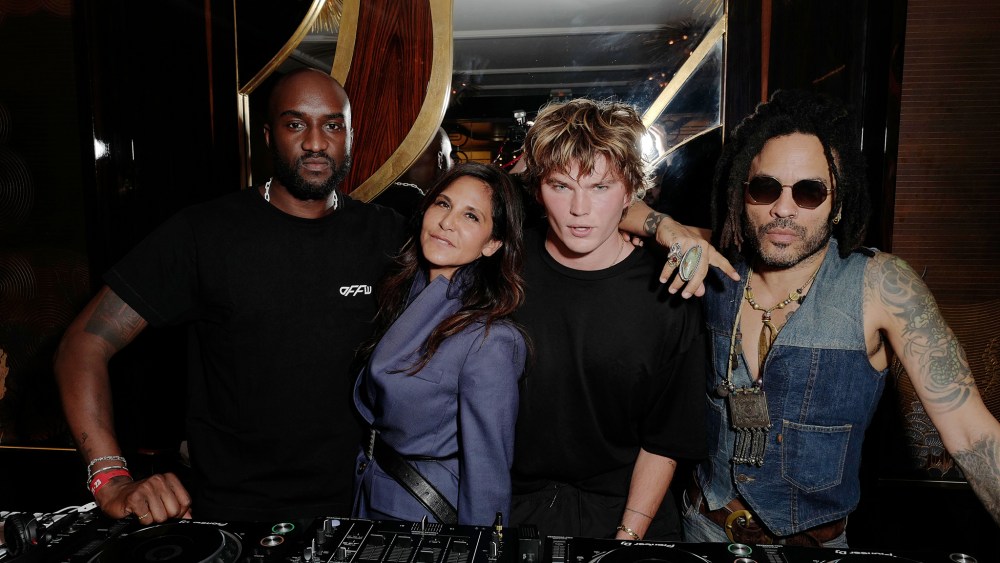 CAVIAR AND SUNGLASSES: It felt like a family gathering on Saturday at La Maison du Caviar in Paris — albeit a very glamorous one.

Jewelry brand Chrome Hearts was celebrating its new eyewear capsule with Australian model Jordan Barrett. The six models with pastel-tinted shades and jewel-encrusted silver details launched that day at the Parisian Chrome Hearts store, to be rolled out worldwide at the end of July.

Model Georgia May Jagger, who starred in the campaign alongside Barrett, came with her brother Lucas Jagger, while rocker Lenny Kravitz, a close friend of Chrome Hearts co-owner Laurie Lynn Stark who lent his Parisian house for the eyewear campaign, showed up to dance to Virgil Abloh’s tunes.

“There is mutual admiration between the Starks and myself based on our appreciation of the finer things in life,” said Abloh, who was relaxing after a busy week presenting his collections for Off-White and Louis Vuitton during Paris men’s week.

Some of those finer things are oversized park benches: The Chrome Hearts co-owner fell head over heels for the ones specially produced for the Louis Vuitton show on Friday and promptly bought two of them.

“I got a lot of interest for those benches,” said Abloh. “They became a commodity.”

The talk went back to sunglasses: The eyewear collaboration with Barrett was two years in the making, and stemmed from Barrett’s fascination with both protection goggles and tinted lenses.

“I wanted to make safety goggles that you can wear to get your laser treatment,” the 23-year-old model said in an interview earlier that day, gesturing to two laser-glass models with clear rubber ear clips. “I ended up taking one from my dermatologist and showing it to Laurie.”

There are no dark lenses in the collection, which was inspired by movies “Fear and Loathing in Las Vegas” and “The Talented Mr. Ripley.” “I only like to look through colors,” said Barrett. “I never wear dark eyewear because I don’t like seeing dark. Wearing the blue ones in the daytime make everything a lot happier.”

In between sipping Champagne and snacking on smoked salmon, guests chattered about how useful sunglasses can be.

“For me they are my number one accessory, especially when I don’t want to do my makeup and I get photographed on the street,” laughed model and TV host Heidi Klum, who was in Paris to shoot her new Amazon Prime series in which she takes young fashion designers all around the world.

Jagger’s favorite pair from the release was the rose-tinted ones.

“We spent a really fun day shooting the campaign,” said the model, whose Rolling Stones father also works with the Chrome Hearts brand, which is an exclusive licensee of the “lip and tongue” design in high end jewelry. “Lenny’s house is amazing: It has this huge basement filled with music instruments, so I pretended to play the piano in the video.”

Some scenes of the video, shot by Stark herself, were filmed at the brand’s newly acquired Jean Nouvel-designed building on the Quai Voltaire in Paris, which will become a new atelier and concept store set to open next year.

There are no days off for the Stark family: Chrome Hearts is gearing up for the launch of its first fragrance, to be debuted next week at Selfridges in London.

“The perfume was seven years in the making. I can’t believe it is coming out at last — it was very emotional for me,” said Stark, adding that her twin daughters Jessie Jo and Frankie Belle will be starring in the campaign. “There are eight pieces including two fragrances — one men’s and one women’s — incense, candles, roll-ons…All with the highest oil content possible, cruelty free, and in the greenest packaging possible.”