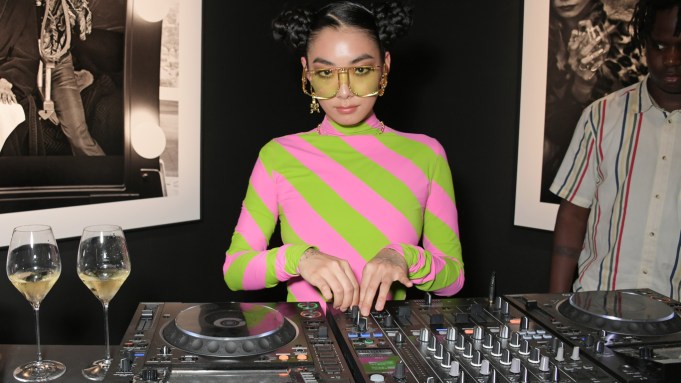 LONDON — “He has such a kind soul, and he really has captured the perfect party. He has got the best people in it! You want to be there,” said Eva Herzigova of her pal Lenny Kravitz, who is making his debut as creative director of Dom Pérignon with a photography exhibition that landed in London’s Primrose Hill on Wednesday night.

Herzigova was right: Usually London starts to empty out this time of year, but the guest list proved there are still die-hard partiers around who were happy to show up for Lenny. They included Princess Beatrice and her boyfriend Edoardo Mapelli Mozzi, Erin O’Connor, Blondey McCoy, Poppy Delevingne, Pam Hogg, Henry Holland and Bella Freud. Neneh Cherry and Rina Sawayama DJ’d, mixing up R&B, hip-hop and Grime.

Called “Dom Pérignon Presents Assemblage: A Lenny Kravitz Photo Exhibition,” the show features images of Susan Sarandon, Alexander Wang, Harvey Keitel, Abbey Lee Kershaw and Zoë Kravitz in candid party shots at the villa that Kravitz’s company designed in Los Angeles. Most prominent was a portrait reminiscent of “The Last Supper,” featuring those same celebrities, and others. London is the latest city to host the show, with Kravitz having already made stops in Milan and New York.

The party took place in a former Victorian riding school, with the black-and-white images on display over two floors. The space had a chic rock-‘n’-roll vibe, with black-clad waiters weaving between guests and refilling their glasses with vintage 2009 Champagne. The free photo exhibition will take place in the same venue, and will be open to the public July 12 and 13.

“This has been a very beautiful collaboration for me because it has not been about business, it has been about friendship,” said Kravitz, who over the past ten years has become close to Richard Geoffroy, Dom Pérignon’s chef de cave, who introduced him to the brand’s cellars. “As different as we are, our disciplines are very similar.”

This is not the first time the Champagne brand has collaborated with a high-profile name: Previous partnerships were with Iris van Herpen, Jeff Koons and David Lynch, who have all put their own spin on the brand’s signature bottle.

Kravitz plans to embark on the next leg of his “Raise Vibration” tour in August, and has been focusing on his photography as part of a collaboration with Leica. The musician is continuing work at his firm, Kravitz Design, which is doing up the interiors for Temple Detroit Hotel, which is set to open next June.