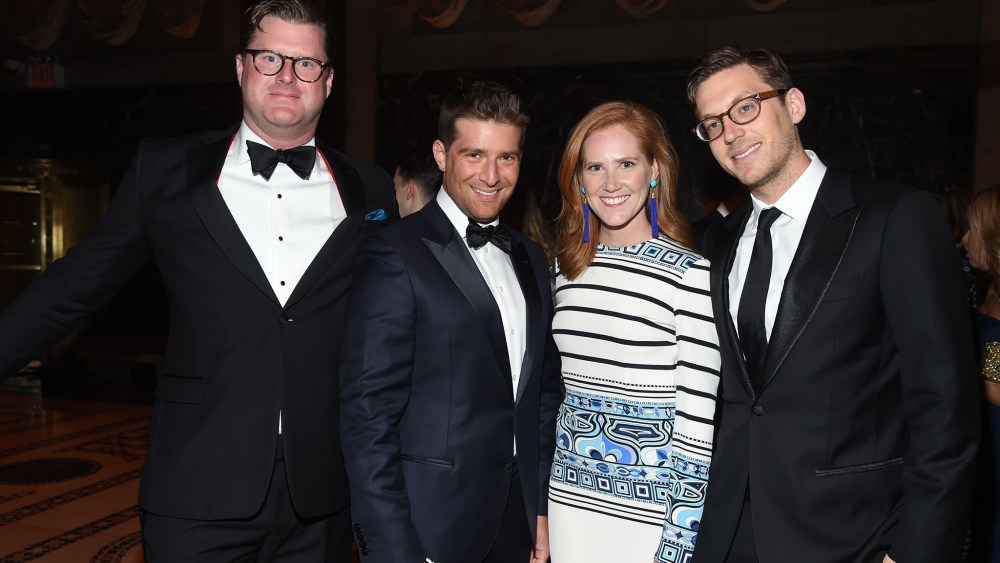 At around 8 p.m. on Tuesday night, a man poked his head through one of the old bank teller windows at Cipriani 42nd Street and smiled. His cheerful mood was shared by the other 499 attendees at Lenox Hill Neighborhood House’s 20th annual gala, including Rep. Carolyn Maloney (D., N.Y.), who was late due to an immigration meeting in Queens, N.Y.

As is the case every year, the focal point of the gala was the tables, 40 of which featured creations from designers such as Lindsey Coral Harper, Amanda Lindroth and David Kleinberg. The centerpiece of one table was an illuminated chandelier partially covered by a silver top hat. A neighboring table had been turned into a tiki lounge, and a third was transformed into a planetarium-shaped spectacle.

Harper drew inspiration for her design — a large arrangement of white and gold magnolias hanging over a black-and-white tablecloth — from Truman Capote’s 1966 Black and White Ball. “I didn’t want to do the cliché sequins and glitter, so I thought, What else glitters?” Harper said. She added that she was also inspired by Melanie Benjamin’s “The Swans of Fifth Avenue.” Copies of Benjamin’s novel and Capote’s “Breakfast at Tiffany’s” were placed on the seats at the table.

“I think they’re creative and that’s the most important thing,” said Geoffrey Bradfield, while skimming the creations. The interior designer, who has been the head of the gala’s design committee since its inception in 1998, was being honored along with John H. Manice. “People have risen to the evening and some of [the designs] are spectacular.”

“The design community has always worked hand-in-hand with Lenox Hill,” explained gala chair Diana Ronan Quasha. “Tonight is our 20th anniversary. We started 20 years ago the idea of the designer tables, which has been borrowed by a lot of people. They say copying is the sincerest form of flattery.”

Elle Decor Interiors editor Robert Rufino, who served as the gala’s design chair for about a decade, admired a “red rose explosion” nearby. “Everyone has a different expression, you know? It’s like walking through a forest.” And quite an imaginative forest — with the occasional top hat and planetarium — at that.