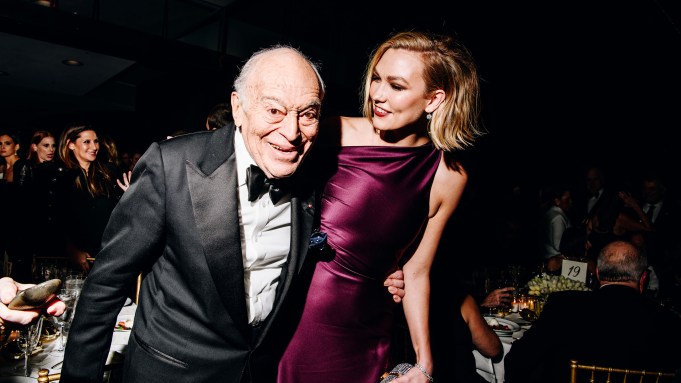 “You look amazing,” a refined, older gentleman said to his date Monday evening from inside Alice Tully Hall at Lincoln Center.

“Only because of Lauder do I look this way,” she retorted.

The Lauder love was in strong showing for the annual Lincoln Center Corporate Fund gala, this year honoring Leonard Lauder.

Now in its seventh year, the evening drew Estée Lauder faces like Elizabeth Hurley, Carolyn Murphy, Karlie Kloss and Hilary Rhoda, as well as much of the extended Lauder family.

Hurley and the evening’s moderator, Tom Ford, were escorted to a private room promptly upon arrival. Brooke Shields gingerly navigated the staircase down to the red carpet, in a tight navy velvet dress. Inside she made her way about, greeting the Lauders one by one.

James Turlington, quickly becoming one of the New York party circuit’s most ubiquitous faces, caught the attention of the cameras alongside a friend.

“He’s the star,” the friend said, ducking out of the way.

Candace Bushnell was in good spirits, and said her secret to navigating the chaos of the holiday social season was to simply enjoy it.

“I’m actually excited about it. It’s the one time of year to go out,” she said. “I just bought something that has some green in it. So yes, I am into festive dressing. I have some things lined up.”

Inside the theater, Lauder was welcomed by onstage appearances by Hurley, Tommy Hilfiger, Glenda Bailey and Hearst’s Steven Swartz.

Hurley told the crowd of the first time she met Lauder: when, at 29 years old, she was asked to come to New York to audition to be the new face of Estée Lauder. It would be her first modeling job.

“When I saw you, I could see at once that you had three qualities that I admired more than any other: I could see that you are wise, you are honest, and you are kind,” she said. “You are quite simply cut from a cloth that has long been discontinued.”

Prior to a performance by Jennifer Hudson (who squeezed in a shout-out promo for her upcoming role in “Cats,” in addition to singing a trio of songs), Lauder and Ford sat in conversation, ranging from lessons he learned from Estée (“Yes mother”), why he thinks a decision should never be made without a woman at the table (“A woman will always tell you what’s on her mind, not what you want to hear”), the importance of a “little blue note” and why he believes in the power of print: “does digital have content? Hardly. Do magazines have content? Yes.”