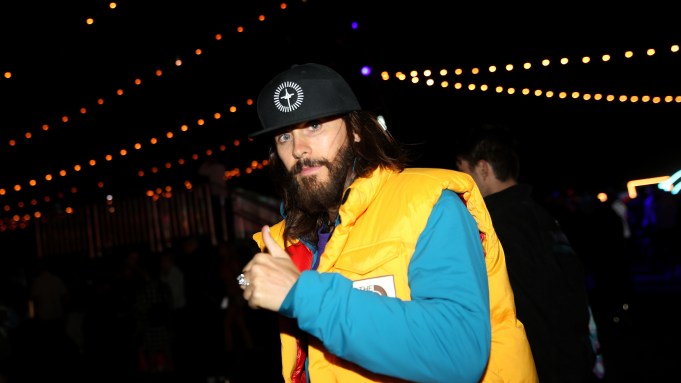 Leonardo DiCaprio has been a regular at Neon Carnival through the years, and he was back Saturday night — along with the likes of Megan Thee Stallion, Timothée Chalamet, Paris Hilton and Jared Leto — for the weekend’s most coveted post-festival party, an invite-only affair that is now in its 11th year after a two-year hiatus due to the pandemic.

In a sea of unmasked faces, DiCaprio arrived masked, ducking cameras in a blue Kansas City Chiefs cap, joined by girlfriend Camila Morrone. Hilton, in contrast, posed for the flashes; she was hard to miss in a rainbow-colored jacket and bedazzled ensemble with matching hat and gloves in the elevated VIP risers. It’s where the celebrities and their entourage hung out for most of the evening and into the early morning hours.

Leto didn’t arrive until 1 a.m., turning heads in a puffy, bright yellow down vest — from the Gucci x The North Face collaboration. There was also Anitta, in all black, a Versace cap, bandeau top and low-rise, G-string-exposed trousers; Rachel Zoe, with husband Rodger Berman, who had hosted her Zoeasis event earlier in the day; sisters Chloe and Halle Bailey; Patrick Schwarzenegger; Rich the Kid; “Riverdale” actresses Lili Reinhart, Vanessa Morgan and Camila Mendes, and a slew of models — all dancing to the beats of returning DJs Ruckus and Kayper, and newcomer Mel DeBarge.

The night owls, about 10,000 guests (lots of face gems, neon colors and cozy hoodies), indulged in carnival festivities, familiar games and rides. The Ferris wheel was a hot attraction, as were the bumper cars.

Like all the major parties this year, the event was held by festival grounds, at the Desert International Horse Park in Thermal, Calif. Longtime partners Levi Strauss & Co and Don Julio Tequila were back as sponsors (with Liquid I.V.).