Guests including Julia Restoin Roitfeld, Caroline de Maigret and Jean Paul Gaultier turned out for the opening of the fashion exhibition. 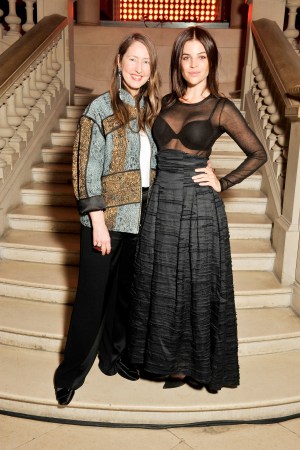 The Twenties may be ripe for a comeback.

The decade’s fashions proved the most popular among female guests at the opening night cocktail on Tuesday for “Fashion Forward, Three Centuries of Fashion,” the H&M-sponsored exhibition at Les Arts Décoratifs that spans from the Regency period to the present day.

“I liked the Twenties, where you feel women’s emancipation, corsets drop and you feel they are having fun,” said Caroline de Maigret, famed for her love of androgynous styles.

Ditto Aurélie Saada, one half of the French pop duo Brigitte, who had a sociological explanation for the era’s appeal.

“It was the beginning of industrialization and as a result, more garments were produced, but they were still very well-made, so women felt more comfortable buying things and dressing up, and they had more outfits,” she said.

“It’s magnificent because it was a crazy time and designers came up with totally mad things during that period that are so modern, and I think you see that very clearly in the exhibition here,” Saada added.

Bianca Brandolini d’Adda had a penchant for a turn-of-the-century gray-blue kimono that she promptly posted on Instagram. “It’s been a year that I’m really into kimonos, for some reason. I think they’re so elegant and sexy at the same time,” she mused. “It works in summer, winter, like over a long dress, or jeans and a T-shirt.”

Ann-Sofie Johansson, creative adviser at H&M, concurred. “It’s easy to move in those kinds of clothes and it fits me really perfect,” she said, singling out the creations of Paul Poiret. “I couldn’t do corsets. It’s beautiful, but it’s nothing for me.”

Johansson pointed to her oversize jacket, made of fabrics including recycled polyester, in a design inspired by an 18th-century textile from the museum’s archives. Pamela Golbin, chief curator of fashion and textiles at Les Arts Décoratifs, selected a coat in the same fabric for the exhibition.

Hermès artistic director Pierre-Alexis Dumas took over as chairman of the institution on Jan. 1 and did not hesitate when asked for his favorite outfit.

“I discovered a very beautiful men’s dressing gown from 1848 that I think would suit me perfectly. I even took a picture of it. I think it’s terribly chic,” he said, whipping out his smartphone to display a picture of the item.

“What I like is the extent to which people wore color,” Dumas added. “You have to dare to wear color. As a man, every time you wear color, you always get compliments.”

Elie Top, meanwhile, revealed his favorite period since childhood has been the 18th century.

“It’s very becoming, and so refined and delicate. It conjures — clearly in a fantasy sense, because it concerns very few people — a lightness and sophistication, and it’s also the period of the Enlightenment, so you sense that tastes are leaning toward that, with a bit of an English influence, too, like a Gainsborough portrait,” he said.

So might the jewelry designer be donning a powdered wig for a costume party sometime? “I like the idea, but I’ll never do it. I’m not much for dressing up,” Top demurred with a laugh.