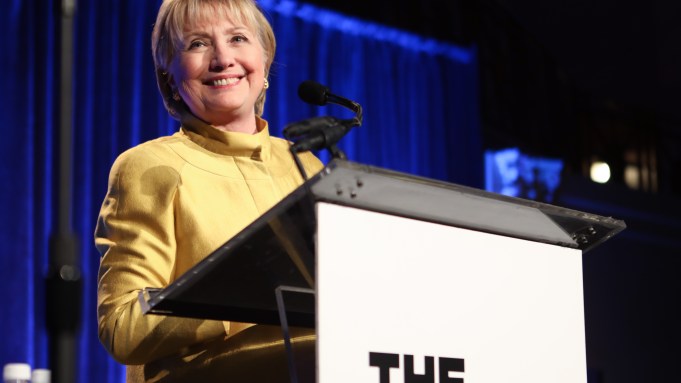 Hillary Clinton cut a relaxed figure Thursday as she accepted The LGBT Center’s Trailblazer Award at the organization’s annual fund-raising dinner. Marc Jacobs, who admitted to being “very nervous” about addressing the crowd at Cipriani Wall Street, received the Visionary Award for his role within the LGBT community.

“It’s such a treat to follow Marc Jacobs,” said the former presidential candidate, who wore a thigh-length dandelion yellow jacket over black pants and kitten heels. “More than 10 [years ago] he was a really young man. All of a sudden out of nowhere he began producing T-shirts with my face on it.

“I was pretty flattered, but of course you know I’m the fashion icon,” she deadpanned to the exuberant crowd, which included a smattering of Donald Trump devotees who were noticeably restrained alongside the booming applause erupting throughout Clinton’s stirring speech. “I feel like I’m preaching to the choir, but that’s OK — I like standing ovations,” quipped the former first lady.

As the sea of soigné guests cleared their plates of filet mignon, scalloped potatoes and broccolini, Arianna Huffington introduced the politician in an over-the-top speech calling her a “cultural icon” as historically significant as “the moon landing or rock ‘n’ roll.”

Jacobs admitted to being humbled by the organization’s decision to honor him saying, “It feels a little weird to be recognized when I just see myself as being true to myself.” The designer admitted that level of attention pales in comparison to the spotlight cast on him at the annual Met Gala. “The night [of the Gala] itself gives me a little bit of anxiety, but every social situation does. I’m really awkward socially,” he said.

Director Lana Wachowski introduced the designer with a personal account of her struggles growing up as a trans woman, noting the lifelong impact of her compassionate second grade teacher. “It was lunchtime and she was tying girls’ hair in pigtails,” the “Matrix” creator recounted. “She noticed me staring — probably as mournfully as our dog stares at us eating buttered toast. To my surprise she asked me if I wanted pigtails, too. For this very small kindness of an afternoon with pigtails, I will forever be grateful to Ms. Coleri.”

The pink-haired filmmaker added, “Marc [Jacobs] sees the world as Ms. Coleri did: through eyes that are kind, that are generous, permissive, inclusive and utopian.”

More than $1.75 million was raised to support the center’s programs, and the event featured the auction of a VIP experience package for an upcoming Katy Perry tour that went for $16,000.

“I’m on a vintage thing,” explained the stylist. “It’s a little bit about my obsession with animals: adopt don’t shop. There are a lot of clothes in the world so let’s make good use of them.”