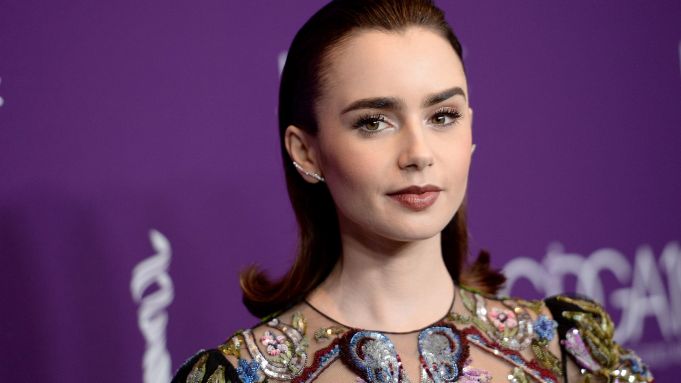 In the lead-up to Oscars weekend, Meryl Streep, Octavia Spencer, Jane Fonda and Lily Collins were among those who turned out at the Costume Designers Guild Awards held at the Beverly Hilton Hotel in Beverly Hills on Tuesday night.

Despite being a fashion pro, Collins admitted the award ceremony gave her some pause when selecting her look. “I kind of had to [give it extra thought] because I was like, ‘All these people are very-fashion forward and are all about self-expression,’ said the actress, who was honored with the Lacoste Spotlight Award for her support of the craft. The other major thought on her mind? “I’m going into a room with Meryl Streep!” Even so, she insisted, “There’s no pressure. It’s all excitement and fun. It really is such an honor to be acknowledged by the people who inspire me. It’s humbling.”

Streep was honored with the Distinguished Collaborator Award. She was presented with the trophy by her frequent costume designer Ann Roth following a good old-fashioned roast from comedian and former “Into the Woods” costar James Corden.

“It’s time that someone said it,” he began. “She’s a complete b—ch. She is the worst. Now listen, I disagree with almost everything that Donald Trump has ever said, but, when he tweeted that…” he deadpanned, referencing the President’s recent remarks that she’s “one of the most over-rated actresses in Hollywood.”

“I’m joking, of course,” Corden said. “It’s great to see someone like Meryl finally be recognized with an award. What is she even going to do with this? This is going to be a doorstop for her Golden Globe room.”

Streep kept her speech short and politics-free as she dedicated the award to her mother “who really wanted to be a costume designer.” She said that Halloween was like “the run-up to fashion week in our house.” The actress said she enjoys the role wardrobe plays in helping to create and explore a character. Streep compared the process to “a happy surprise, like simultaneous orgasm or something.” She paused. “Well, maybe it’s not that much fun, but it is a little tiny miracle every time it happens.”

Earlier in the night, “Transparent” actresses Amy Landecker and Trace Lysette walked the carpet in honor of their show’s costume designer Marie Schley. “This is one of my character’s costumes from season four,” Landecker said of her Stella McCartney suit. “As soon as I had my fitting with this suit for season four, I said, ‘I want to steal that for a red carpet,’ so it seemed appropriate to do it for Marie’s event.”

“It has been a lot more fuss over me than I’m used to,” said Zophres, who is also nominated at Sunday’s Academy Awards. “There’s been a lot of hoopla surrounding ‘La La Land.’ I won’t tell you that the attention is normal, but it’s been nice and on Monday I’ll be happy to go back to my normal life.”