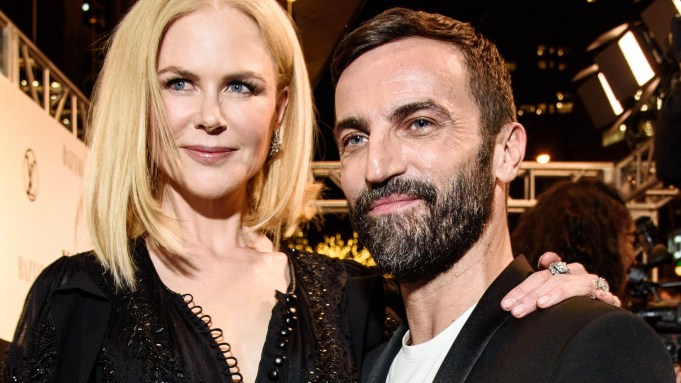 Fall on the social circuit without black tie events would be, to the many New Yorkers who frequent its soirées, unthinkable (rest assured, the autumn gala season is nearing its end, for those crossing their calendars). But while repeat nights of dress trains and tuxes might be the norm on this side of the Atlantic, it remains an exception for the French — one to be made, naturally, when in New York.

“It’s not the habit. You very rarely dress up black tie in Paris. Twice, three times a year. Here, it’s three times a week. This is very New York — it’s reminiscent for me,” Burke continued, adding that he and his wife, Brigitte, used to be season ticket holders of the opera when they lived in the area, and would regularly drive in from Connecticut for an evening at the Metropolitan Opera.

Flown in from the French capital and in their New York nicest were Burke and Nicolas Ghesquière, present for the fifth annual Lincoln Center Corporate Fund Gala, hosted by Harper’s Bazaar and Hearst, which this year honored Louis Vuitton and its artistic director of women’s collections.

Accepting the honor from Connelly and Paul Bettany onstage, Ghesquière paid respects to his friend Azzedine Alaïa and also gave tribute to the many women stepping forward against sexual harassment in the current cultural awakening.

“It means a lot — I’m very honored and very proud to be associated to the Lincoln Center, to be associated with the arts and all the support they are giving to young people, the future talents,” he said backstage, shortly before the program.

“I’m very proud of Nicolas — when Nicolas joined us four years ago, it was not obvious,” Burke said of the recognition. “The industry had some doubts, because Nicolas was coming from a very niche situation, and going to the largest most successful luxury house in the world. And so this is kind of vindicating that choice, both his choice and my choice. We’ve come a long ways.”

Rapace huddled with the artist Cindy Sherman during the cocktail hour and though not paid campaign faces like much of the celeb talent present for the evening, both sung the designer’s praises.

“It was in Paris, with friends, in a restaurant,” Rapace recalled of the first time she and Ghesquière met. “And I got really quiet, because I really respect him. Normally I can be quite talky, but I was completely shy. And he watches films — like, he watches everything — so he’d seen a lot of my films. So I got quite shy when he told me that he liked my work.”

Dressed head-to-toe in a Vuitton skirt, blouse and jacket, Turner made a beeline through down the red carpet and through the cocktail hour, for some quiet backstage.

Related: Sophie Turner on Why Louis Vuitton Reminds Her of ‘Game of Thrones’

“[This is] probably my favorite Vuitton look that I’ve worn so far,” she said of her look. The “Game of Thrones” star is now a Vuitton campaign face, but not too long ago the 21 year-old was simply a young admirer of the brand’s iconic logo.

“I remember my mom had a Vuitton bag and I would carry it around all the time, because it was her prized possession — it was the one designer bag she ever had,” Turner said. “I would go into her closet and wear it and dress up, and play pretend.”

Sofia Coppola on Fabrizio Viti: ‘He Pushes Me to Be More Glamorous’

Read ‘The Great Gatsby’ in F. Scott Fitzgerald’s Own Handwriting