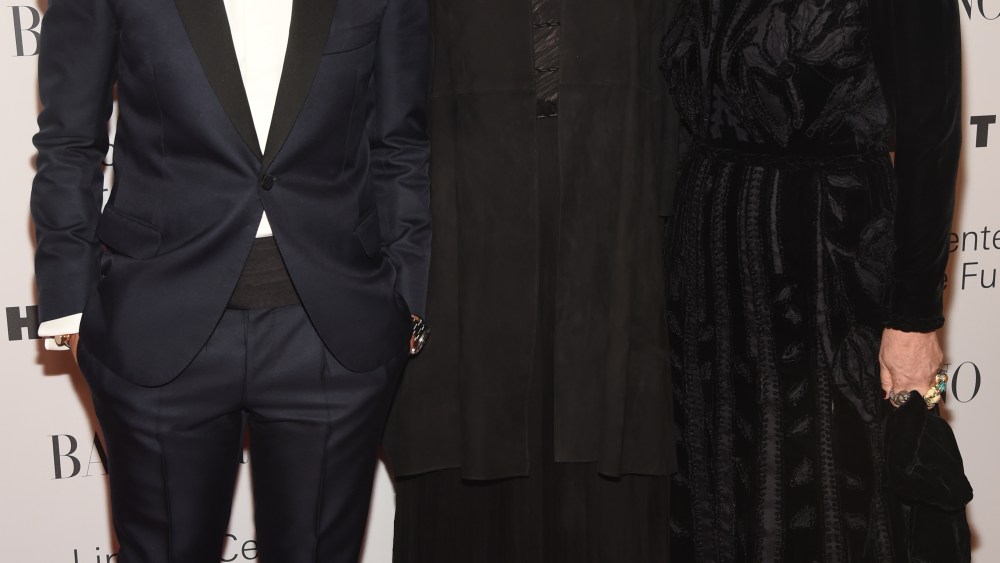 Valentino creative directors Maria Grazia Chiuri and Pierpaolo Piccioli wound down their mini tour of America Monday night as the subject of Lincoln Center’s “Evening Honoring Valentino.” Fitting, since the Hearst-sponsored event benefits Lincoln Center’s 10 resident institutions, including Juilliard, the Metropolitan Opera and the New York Philharmonic, and Chiuri and Piccioli’s allegiance to the arts was incontestable after they had spent the better part of a week on an art binge in Miami and New York.

They had traveled to Art Basel Miami for the first time, attempting to stage their own performance piece last week with the Roman artist Pietro Ruffo and then upping the ante by unveiling their involvement in Mirabilia Romae, a permanent art and history Freedom Trail of sorts for the City of Rome to be completed next year. “We had a private tour of the [Wynwood Walls] graffiti art and saw amazing pieces at the fair,” said Chiuri, pulling up a photo of a Brancusi mask she had seen at Art Basel on her iPhone. Did she buy it? “No,” said Chiuri, laughing at the thought. “I cannot.”

Apparently, Miami only whetted her arty appetite — she went to the Picasso sculpture exhibit at the MoMA when she returned to New York over the weekend. “In the U.S., you can see so many types of art,” she said. “It’s very special.”

For the most part, the relatively new event seems to be orchestrated by Harper’s Bazaar’s Glenda Bailey, who books the evening’s lineup fashion and entertainment. For its inauguration two years ago, Karl Lagerfeld was honored; last year it was Stella McCartney. This year, she zeroed in on Chiuri and Piccioli to receive the Women’s Leadership Award for turning “a storied brand into a fairy tale,” said Bailey during her intro. “They invented the Rock Stud, but in fashion they are the rock stars.” For their part, Chiuri and Piccioli requested the presence of a  real rock star: Debbie Harry.

“I have to say, I really wanted to introduce the next guest but someone more good-looking beat me to it,” Piccioli said. Bruce Willis, starring in “Misery” on Broadway, had the honor of cueing up Harry, joined by Blondie keyboardist Matt Katz-Bohen and four Juilliard musicians, for a four-song performance, including “Tide is High” and “Heart of Glass.”

“We love you Debbie!” called Gurung from his seat. He wasn’t alone. Willis referred to Chiuri and Piccioli as Harry’s “number one fans.”

“She was a revolutionary. She changed everything,” said Chiuri.  “I remember a T-shirt that said ‘Blondie is not a group’ because it was the name of the whole band but people thought it was just her.”

Speaking of blondies, was the rumor circulating Chiuri’s table that she was thinking of dyeig her currently platinum hair pink true? “Maybe. I like to play,” she said. “Why not?”