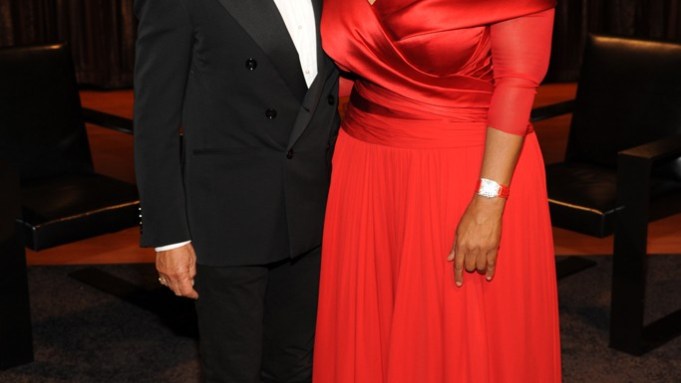 “She is very special,” Ralph Lauren said on Monday night shortly before taking the stage at Alice Tully Hall to be interviewed by Oprah Winfrey. “Talking to her about any subject is very interesting. She is energetic and very optimistic, and also very funny, and at the same time, a real pro. It’s going to be very interesting. I don’t know the questions Oprah is going to ask me.”

In a sequel of sorts to their televised tête-à-tête earlier this year, Lauren coaxed the former talk show host back into the interviewer’s chair for the evening, which dually benefited the Ralph Lauren Center for Cancer Care and Prevention in Harlem and Lincoln Center for the Performing Arts (to the tune of more than $7 million dollars).

The opportunity to see the two premier American personalities — brands even — in each of their respective industries share the stage drew a mixed batch of the pretty and the powerful to the black-tie event, which included a gala dinner afterward.

See Images From the Gala Here >>

“Having listened to them chat on film, but also off film out in Colorado, I think that they really bond and that they really understand each other and they both love the challenges of building brands and understanding people and using the excitement of living to communicate it through their work,” said David Lauren at a Champagne reception prior to the show.

“Both,” said Naomi Watts, when asked if either Lauren or Oprah had brought her out. “I think the pairing is very interesting, and I’m really curious to see what they’re going to talk about. I know there’s a lot.”

There was indeed. The night’s presentation included a lengthy video that recapped Lauren’s career and design accomplishments, a heartfelt interview by Oprah, in which Lauren said he “aims to get better every day,” and a redux of the brand’s spring presentation.

Even the comedians in the house were feeling a bit heartfelt about the proceedings.

“We’ve certainly had fun parodying Oprah in the past, but I think on a night like tonight because it’s an off week [for ‘Saturday Night Live’], I’m going to let my brain shut down and enjoy it as what it is and for at least one night, not look to find parody in something,” said Seth Meyers. “Once a month I like to open my heart, let it get some air.”

A little while later, the hostess took the stage.

“He would tell you that the fabric of America defined his work,” Winfrey told the audience. “But as a matter of fact, he designed the fabric.”