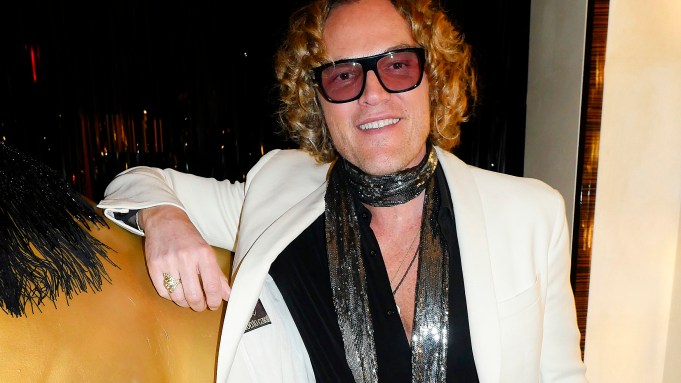 On Friday night, alongside the glittering apparel and accessories in Bergdorf Goodman’s windows, stood a scantily clad go-go dancer gyrating in the direction of The Plaza Hotel. Upstairs, the retailer’s shoe salon had been converted into a disco-themed “Club 58” celebrating the launch of a capsule collection from Peter Dundas’ label.

Last year, the Norwegian-born designer revealed the creation of Dundas, his first solo endeavor after serving as creative director for Emilio Pucci, Emanuel Ungaro and Roberto Cavalli. Dundas formed the company with Evangelo Bousis, his partner both in life and in business.

“I love Peter and Evangelo very much,” said Princess Beatrice of York, who navigated around the mirrorball-lit dance floor as DJ Mia Moretti’s disco soundtrack vibrated the room. “He’s had such an incredible career and to then go off and do something on your own is so courageous.”

Beatrice, who typically avoids New York Fashion Week events, attended “very much as a supportive friend.” The 29-year-old granddaughter of Queen Elizabeth II went on to explain the emotional appeal of Dundas’ designs. “You feel so feminine when you’re wearing his clothes. When you’re wearing something from Peter, you’re getting an extra boost of confidence.”

Others on hand to toast Dundas’ latest collection were Princess Olympia of Greece, Philip of Greece, Kelly Rutherford, Winnie Harlow, Rosie Huntington-Whiteley, Rachel Zoe and Patricia Field, who expressed her shock at how quickly each season of fashion comes and goes. “It feels like we were just at Bryant Park with fashion week, but what was that — 2010?” she said.

Bergdorf senior vice president Linda Fargo, who cohosted the event with Dundas as well as jewelry designer Eugenie Niarchos, is already feeling the pressures of the fashion month ahead. “It’s just nonstop. Even right now I have 70 unanswered e-mails that I need to get to.”

Pending work notwithstanding, Fargo allowed herself to kick up her heels, spinning around the dance floor alongside Ann Dexter Jones and Devon Windsor in a black Saint Laurent jacket with exaggerated rhinestone shoulders. “They’re almost sold out of everything that we had that’s Dundas so I didn’t want to take one more piece off the floor,” she admitted of her outfit choice. “I said, ‘I’m sorry guys, I’m going to have to wear another designer tonight because I don’t want to have to deplete what’s left.’ Hopefully they’ll forgive me.”

But Fargo didn’t need to be wearing the designer’s clothes in order to properly display her admiration of his latest venture. “It’s so hard to start your own business and to come out from under the umbrella of a brand and actually go out and try to build it on your own,” she continued. “Chapeau, chapeau to him. He pulled it off. They didn’t go huge. They’re doing it very carefully, with a lot of glam and the collections have a lot of variety within that one message.”

Dundas was humbled by the outpouring of support that came from all directions as he slowly moved through the packed room of well-wishers. “This means the world to me. I loved Linda’s work at Bergdorf’s even before I was completely aware of Bergdorf’s back when I was a fashion baby,” he said. “I’m so pleased we’re doing this [capsule collection] together.”

But like Fargo, Dundas had his share of pending responsibilities awaiting after the cocktail party, which carried on past midnight. “It’s a week and a half before I finish my collection and I said [to Evangelo], ‘Are you sure we can do all of this?’ We’re here from London and it’s fabulous. It’s so much fun to be part of New York Fashion Week and to see our friends, but I have a lot of work to do.”

As with his current pieces, Dundas’ next collection promises to feature “elements of Seventies glam,” an era to which he’s always been drawn. “I think I was a bit frustrated to not have been a part of that [scene in the Seventies]. It’s probably best that I wasn’t around though because I don’t do anything in half measure,” he added with a laugh.

“It was easy-going, sexy and fun-loving,” he said of the decade. “I love girls who have fun in their lives and celebrate. We try to do that with the brand as well.”

Isla Fisher in Town for Just the Day, Lucy Hale at Fashion Week to Stay