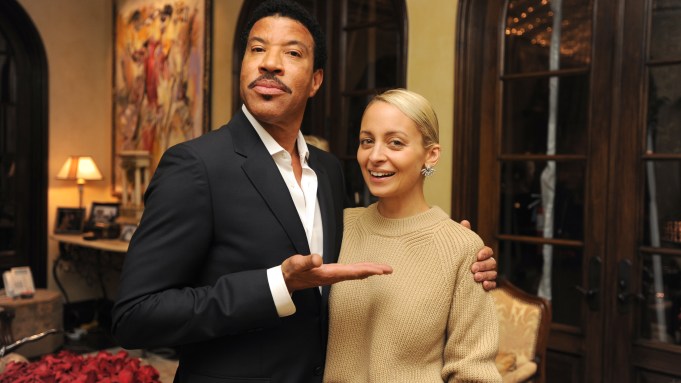 As guests stepped into Lionel Richie’s Beverly Hills home on Wednesday, they weren’t greeted with a “Hello” from the host, but rather by the aroma of scented candles from the singer-songwriter-record-producer’s new home collection.

“This is really something that I do,” Richie said, standing near the dining table tinkering with candlelight where a four-course feast was about to be served. Plenty of Dom Pérignon helped the digestion process (the brand cohosted the meal).

“We’ve been working on this for two years,” said Richie’s girlfriend Lisa Parigi. “He’d get off of stage and say, ‘Hey, I think I have an idea.’” With a full range of product from high-end dinnerware, glassware, and vases to scented candles and accessories retailing from $56 to $1,500 on his Web site, Richie’s dreams finally came true, but not before a couple of test runs. “We’ve done this twice already just as a warm-up,” Richie said during his pre-dinner toast. “The only problem I’m having out of this whole launch is that I get here, and there’s no band. In case I make a mistake, there’s no cymbal crashing.”

Luckily, any faux pas were muffled by the endless supply of vintage Champagne and guest Kevin Spacey’s spot-on impersonations of Johnny Carson and former President Bill Clinton that sent the room into a roar. “Listen, I got your invitation even though you sent one to Hillary as well,” jested the “House of Cards” actor. “She replied and out of habit she immediately deleted it.”

One guest who didn’t miss the spread of caviar, salad, rainbow chard risotto and lemon polenta cake was Richie’s daughter Nicole, who arrived with husband Joel Madden and brother-in-law Benji Madden. “Nicole came over and whispered in my ear, ‘Oh my God, this is good Dad,’” the elder Richie said. “This is the first time she’s seen it, and I got the little pat on the back, which is very comforting because she’s a tough cookie.”