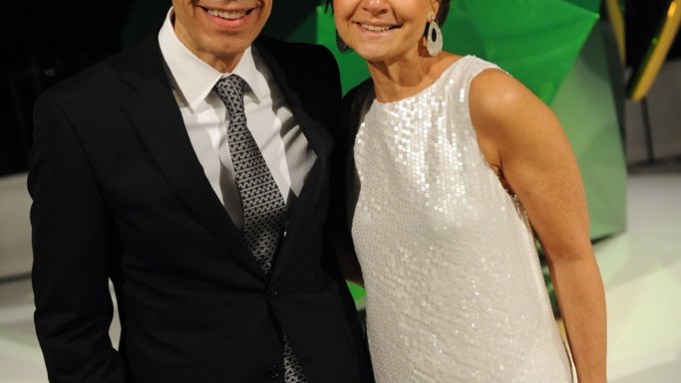 Lisa Perry is the sort of art collector who has both a massive-scale Jeff Koons green “diamond” ring sculpture on the patio of her Sutton Place penthouse and a small — all things being relative here — version of it to match for her left hand. She and her husband Richard, the hedge fund manager who reportedly gifted her both rings for her 50th birthday, don’t seem to have much use for subtlety. On Thursday night, the Perrys went one step further and had Koons himself, along with wife Justine, on hand for a dinner party to celebrate Perry’s recent collaboration with the artist on a fashion collection that features some of his imagery. The designer has previously riffed on the work of Andy Warhol and Roy Lichtenstein, but working with a living artist presented a new wrinkle to her routine.

“I did something that I thought was really cute,” said Perry, explaining her idea to put one of Koons’ balloon-dog sculptures on a Fifties poodle skirt. “I thought that was such a fun idea. He didn’t like it….It wasn’t that he didn’t like it, because he’s so kind. He would never say a bad word. He just said, ‘Of all of these, I prefer this one the least.’”

Perry, who wore a white sequined shift dress from the collection that featured a print of Koons’ “Pink Panther” sculpture on its back, welcomed about 30 guests, some of whom arrived from a cocktail party at her recently relocated Madison Avenue boutique. Partygoers included Yvonne Force Villareal, Aby Rosen and Samantha Boardman Rosen, Tory Burch, David Maupin and Stefano Tonchi, who co-hosted. Staffers corralled guests into their primary-color chairs around the very long banquet table, which was dotted with bright blue balloon dogs.

“Lisa, I’ve always enjoyed your designs, and then coming into your home and seeing how you and Richard live: just so open, and your personalities are so wonderful,” an unrelentingly positive Koons said after Perry offered a toast in his honor. “So when you asked to use some of the images for a new line, I was absolutely honored….The beauty of minimalism and the generosity of Pop — you capture so well.”

Sure enough, when the main course of chicken pot pie arrived, even that had been grammatically altered to suit Perry’s tastes. Three letters raised up from each dish’s crust: “POP.”