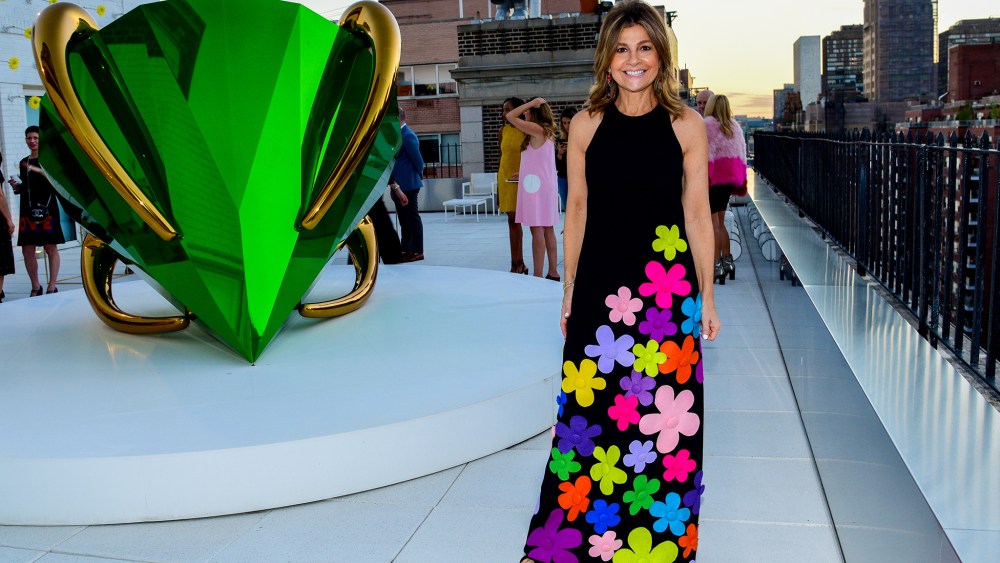 “In the fashion business, I feel that it’s great to make it 10 years and to be thriving,” said Lisa Perry from the salon of her penthouse overlooking Manhattan’s Queensboro Bridge. On Tuesday evening, she opened its doors to celebrate that milestone and its accompanying collection, made available at Barneys New York (which her husband, the hedge funder Richard Perry, owns) that morning.

On display in the salon were 10 mannequins modeling the anniversary collection, and on show throughout the rest of the house were the dozens upon dozens of Pop Art pieces that Perry had been collecting for nearly 20 years. “Feel free to roam” was the popular saying of the night — in addition to “congratulations,” of course.

“There are no walls left,” said Perry, who started acquiring pieces in 2000. “I don’t want to ever put anything in storage and sometimes we’ve swapped things out, but the collection is at a place that is, we’re really happy with it. Pop Art has skyrocketed. It’s a whole different world from 2000, Pop Art. So we’re very happy with what we have, what we were able to get. For some other homes and for my kids, we collect younger artists and still look for different places, but this home, we’re good.”

The salon, she said, was designed for conversation and has hosted many an event — both fashion and political — in its time. Tuesday’s was obviously a fashion event — and a productive one at that. Guests were able to place orders right in the salon.

“Some people do their anniversary collections one per year, one from each year,” Perry explained. “I decided to do my favorites. A lot of them are from the very beginning, and I think they still resonate with people, they still look modern and timeless. I thought it was important to include one of the artist dresses, which were very limited at the time, and now I was able to open it up to a bigger audience at Barneys.” She’ll be doing launch appearances in both Beverly Hills and Chicago.

When asked to name a highlight from over the years, Perry pointed to a few. “Opening new stores, that was always exciting,” she said. “Working with the customers, my artist collaborations — each one was an incredible highlight.” And, she couldn’t forget, dressing Hillary Clinton to accept her nomination for president.

“Being in Lisa Perry and walking out in Lisa Perry, I knew it made her feel so good,” she said. “[It] was a real honor.”