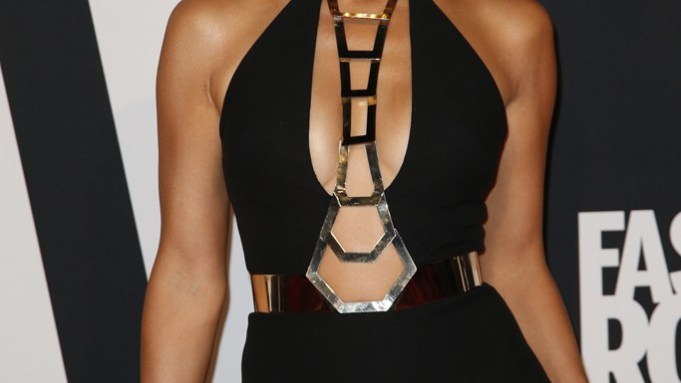 New York Fashion Week covets a comeback kid, and on Tuesday night Fashion Rocks came back in a big way after a six-year hiatus with a concert extravaganza live at Barclays Center in Brooklyn.

A palette of musical stars — Jennifer Lopez, Nicki Minaj, Enrique Iglesias, Rita Ora, Jennifer Hudson, Pitbull, Duran Duran, KISS and a few country acts for good measure, convened to perform while models paraded the stage wearing clothing from Macy’s, a sponsor. Even Justin Bieber made a brief appearance, not to sing but to strip down to his Calvins — another one of the event’s sponsors — before introducing Rita Ora to the stage.

“Think about fashion, think about who’s in the front row of most of the shows. It’s a combination of people like me, who are buying the clothes, and Hollywood,” said Macy’s chairman and chief executive officer Terry J. Lundgren, walking the red carpet before the show wearing a jacket by host Ryan Seacrest. Seacrest was wearing it, too — his line Ryan Seacrest Distinction is exclusive to Macy’s. Representing the Hollywood and fashion contingents were the likes of ubiquitors Joe and Nick Jonas, Victor Cruz, Estelle, Willow Shields, Naomi Campbell, Joan Smalls, Lily Aldridge and Karolina Kurkova.

“I just landed today, so I’m just playing catch-up for the most part. I’m happy to be here — the atmosphere is great, the people are beautiful,” said rapper 2 Chainz (née Tauheed Epps), who had caught the Skingraft show a few hours earlier. “As for the music and the fashion, I just believe they cross paths, they coincide. You can’t have one without the other. They inspire each other so that’s definitely why I’m here.” Also, the eye candy. “I’m interested in seeing J. Lo. I mean, who’s not?”

While the rapper’s week was just revving up, New York Fashion Week was already a blur for Kurkova, who had difficulty recalling a show.

“So many! There’s been a lot of amazing stuff. I think Dion Lee was amazing. Uh… uh… hold on. Who else?” The model had tripped herself up. “There were so many….Versus was great, um, I have it all on my phone. Who else am I forgetting?”

Nearby on the carpet, Steve Madden was keeping it together before his on-air appearance introducing Minaj. “It’s all part of what we do, the music and the shoes. Almost every year is defined by the star of that moment,” the designer said. “I am excited to see ‘Magic!’ You know that song?” Madden started singing for reference. “‘Why’d you have to be so ruuudeee…’”

Luckily for Madden, the up-and-coming fusion band performed that song twice that night. After the concert, Magic took the stage at the after party, held at Weylin B. Seymour inside the lofty former Williamsburgh Savings Bank. “This is the biggest song in the world,” lead singer Nasri Tony Atweh shouted to the crowd.

Perhaps, but not big enough to draw out any of the event’s headliners post-show.