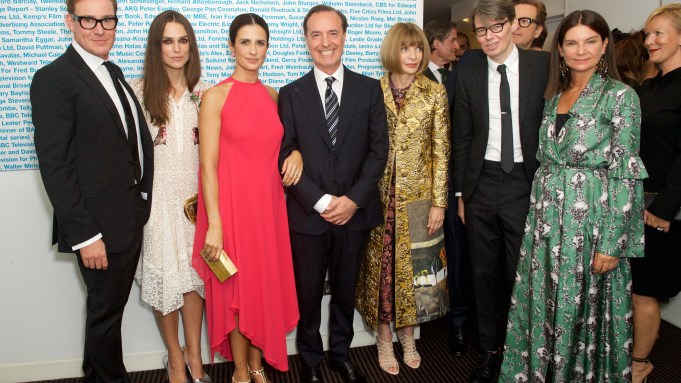 THIS OLD THING: Back on the London Fashion Week agenda for the fourth year to raise awareness for sustainable fashion, Livia Firth’s Green Carpet Challenge joined with the British Academy of Film and Television Arts and the British Fashion Council to stage a one-night exhibition of  vintage couture curated by William Banks-Blaney.

According to Firth, vintage fashion can play a role in helping to reduce the fashion global footprint, which includes 132 million metric tons of coal used each year to produce, dye and bleach new fabrics, and the 6-9 trillion litres of water used by the industry. And the red carpet is an excellent soap box from which to shout that message.

Livia Firth and Berry had both been dressed for the evening in gowns from Banks-Blaney’s trove of vintage dresses, with Firth in a fuchsia silk dress by Lanvin from 1978 and Berry in a gem-encrusted Oscar de la Renta gown from 1968.

“He also told me how I should wear my hair and the type of shoes I should wear,” said Berry of the William Vintage full-service treatment. “He said I needed my hair up and I had to have a loafer-type shoe with a block heel. It took me a while to find but I was not going to let him down, I was determined.”

Firth had her own ideas about footwear. “Last year at our event, I had on these Sergio Rossi shoes that had 12 cm heels and, by the end of the night, I couldn’t walk anymore and I ended up at the osteopath the following day.” she told WWD. “So this year I thought, ‘If I have to stand up for hours I can only do it in low heels.'”

The showpiece of the exhibition was a gown by John Galliano for Givenchy, from his first couture collection in 1996, its huge sweeping skirt played over the central raised dais.

Among the highlights in the exhibition of dresses was a feathered gown by Hubert de Givenchy from 1988, an identical version of which was worn by Audrey Hepburn when Givenchy was presented with his California Lifetime Achievement Award that same year; and a sari-inspired dress by Gianni Versace that was worn on the runway by Linda Evangelista in 1994.

There were also dresses worn by Cameron Diaz and Emma Watson.

The event also marked the launch of the world’s first biodegradable mannequins, on which the dresses were displayed. The most remarkable thing about them? Absolutely nothing, and that’s the point. “They are amazing because they look like normal mannequins, you don’t look at them and think they are eco-friendly; Everything has to look über-chic and beautiful,” explained Firth, adding that Italian mannequin manufacturer Bonaveri had approached her after developing a polymer made with sugarcane in association with the University of Milan.

“We thought about how we might do something together. A huge part of fashion today happens on the red carpet – this was how the Green Carpet Challenge started,” she explained.

“I thought, ‘Wouldn’t it be beautiful if BAFTA partnered with the BFC during London Fashion Week to make sure that the movies and fashion are so interlinked?'” she noted, adding that Berry had suggested premiering “The First Monday In May,” the documentary about the Met Gala, on the same evening. “It’s a movie about fashion and the red carpet so all the little pieces of the puzzles came together.”

As guests settled in to their seats for the film, Firth was joined on stage by her many co-hosts, as well as Andrea and Guido Bonaveri, as Colin Firth introduced the film.

“The real reason I am making this introduction, really, is because I appeared in the film; in act three. I take on the role which I think will be remembered in cinema history as ‘dimly-lit-figure-seen-fleetingly-on-edge-of-frame-next-to-George Clooney,'” he deadpanned. “So I urge you, please, do not take your eyes from the screen ever.”