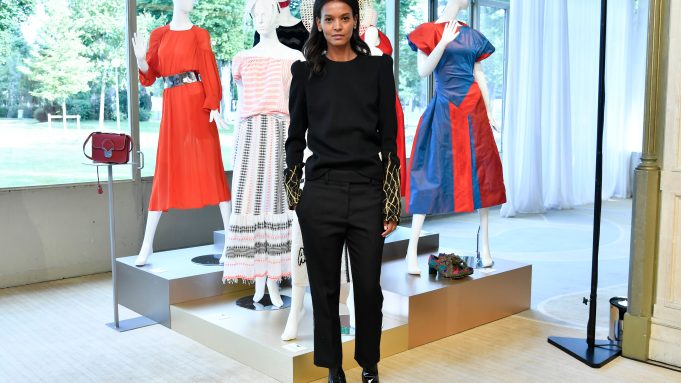 PARIS — In celebration of the French release of “Wonder Woman,” Liya Kebede teamed with Warner Bros. to host a charity auction of outfits donated by designers to benefit her Lemlem Foundation — drawing a bunch of real-life influential women who were only too glad to talk female empowerment.

Kebede recalled she first came across a cartoon of Wonder Woman as a 6-year-old living in Italy. “She was an Italian Wonder Woman — she speaks all the languages in the world. Whether I understood everything she said or not, I don’t know, but I thought she was pretty cool,” the model and philanthropist said.

These days, the quality she admires most in other women is selflessness. “I encounter a lot of women who are really passionate about making changes for other people, and it’s always so inspiring,” she said.

The money raised by the event — 20,000 euros, or $22,375 at current exchange — will go toward education and training for the artisans who produce her Lemlem clothing line in Ethiopia. The brand opened its first pop-up at Platform in Los Angeles this week and will unveil another at Maiyet in New York City on June 15.

While many designers selected looks from their most recent collections, some created items especially for the auction. Toledano donated a pair of oversized jeweled cuffs. “I think it’s a weapon of power and seduction,” she said with a laugh.

The accessories designer was looking forward to catching the movie to see how newcomer Gal Gadot matches up to Lynda Carter, star of the “Wonder Woman” TV series in the Seventies.

“I saw that there was quite a lot of controversy regarding the fact that she’s Israeli. I find that kind of incredible,” Toledano said. “Because Wonder Woman is really the opposite of all that — she is global and she strives for peace.”

Despite the film being banned by some Arab nations, such as Lebanon, Jordan and Tunisia, Ingie Chalhoub recently saw the movie in Dubai, and she was all in.

“We’ve had a lot of James Bond, Batman, Superman, ‘Mission Impossible’ with Tom Cruise. Today, we really needed a female equivalent and since I am very much a feminist and an entrepreneur, I like seeing the image of this new woman who is beautiful and strong, both physically and intellectually,” she said.

Chalhoub is president and managing director of Etoile Group, which holds franchises in the Middle East for luxury brands including Chanel and Valentino, and she designs her own ready-to-wear line, Ingie Paris. She revealed that she has just taken on yet another role: chief operating officer of Arab Fashion Week.

Her first challenge will be dealing with the fallout from a number of nations, including Saudi Arabia and the United Arab Emirates, cutting diplomatic ties with Qatar, citing its support for regional rival Iran and for extremist groups. This has resulted in a land, sea and air blockade.

“It’s going to be a little difficult for trade, retail and human relations. Around 6 percent of our customers in Dubai were Qataris, and there is a lot of merchandise that transits through Dubai on the way to Qatar. This throws a spanner in the works,” Chalhoub said.

Multitasking is a life goal for Phung, who donated a metallic pleated dress from her spring collection for Leonard.

“I admire some women’s capacity for successfully balancing their lives and combining several lives into one: businesswoman, lover, mother and friend,” she said. “When you manage to cover all the bases, you feel more fulfilled, but it’s harder.”