The British brand toasted its new Manhattan outpost over dinner at Soho House. 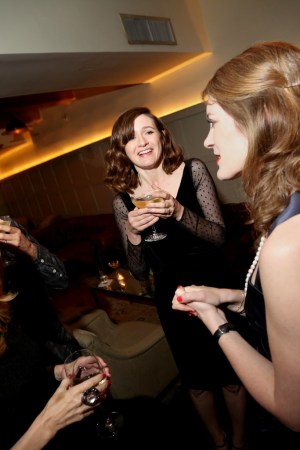 British accessories brand L.K. Bennett has gotten a bit of a bump in the last year thanks to the Duchess of Cambridge’s occasional favoring of its preppy — make that Sloaney — wears. It makes sense, then, that the retailer has made its way to New York as part of a wider U.S. rollout. On Wednesday night, a handful of Brits and American Anglophiles toasted the brand’s New York flagship, which opened last month, with a small dinner at Soho House’s Library Room.

Among those in attendance were Emily Mortimer, who is fronting the brand’s upcoming ad campaign and had been shooting that day, Euan Rellie, Allison Aston, Patricia Clarkson and Annabel Tollman, who served as a cohost. Michelle Trachtenberg took a break from her BlackBerry to sing the praises of the stylist.

“Anything for Ms. Tollman…Lady Tolls,” she said of her seatmate with a laugh. “That used to be her BBM name.”

Clarkson was actually filling in as Felicity Blunt’s date as her fiancé, Stanley Tucci, was in Toronto filming.

“She won’t criticize my shoes,” Blunt said of the trade-off. “He’s a bit of a fashionista.”

Clarkson raved about her L.K. Bennett silver heels, claiming they were the most comfortable shoes she’d ever worn. “I’m never taking these off again,” she said, raising her leg to showcase the shoe. “Oops, I may have just shown you too much!”

More importantly, the actress had her mind on rehearsals for the Williamstown, Mass., production of “The Elephant Man,” where she’ll share the stage with Bradley Cooper this summer, in a role that will require onstage nudity. “I’m working my way towards it,” Clarkson laughed of her preparations.