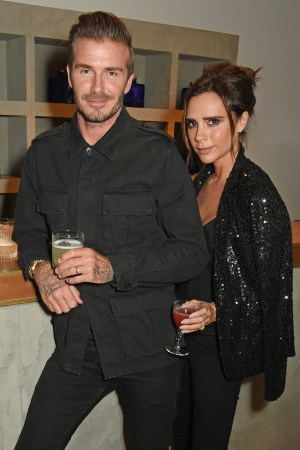 STREET LIFE: Parties on Downing Street — and Dover Street — marked the finish of London Fashion Week, with revelers hopping from an 18th-century Georgian icon to a vast polished concrete space filled with white balloons the size of medicine balls.

“It’s slightly mad in here, but really good fun,” said Christopher Bailey, making his way through a sea of giant balloons that filled the window — and the entire ground floor — of Victoria Beckham’s Dover Street store.

Assistants were posted around the transformed room to help guests find their way to the staircase.

Beckham hosted a dinner to mark the store’s first anniversary, and the balloons were a new installation by Turner Prize winning artist Martin Creed.

“Tonight is about you — and your balloons,” said the gracious Beckham, who thanked her team, her husband David, her longtime business partner Simon Fuller — and various others — multiple times. “We really wanted to celebrate the store while everyone was still in London.”

“This store is a real step up — and I’m so proud of her,” said David Beckham of his wife, adding, “We try to be a good team.”

Fuller, meanwhile, said he can’t wait to see Beckham design shoes. “She loves them so much, and I’m looking forward to seeing how she does them.” He added there were more branded stores to roll out, too.

Earlier in the evening, Britain’s First Lady Samantha Cameron hosted a cocktail to mark the week with British Fashion Council chairman Natalie Massenet at No. 10 Downing Street, the prime minister’s home and headquarters.

“It’s really bizarre being here,” said Molly Goddard, who was attending the regular Downing Street event for the first time. “It’s like Disneyland in a way — because you’ve somehow seen it all before. And then you see this little street — and a little house.”

Katrantzou talked about designing costumes for the Paris Opera Ballet in July — following in the footsteps of Valentino and Thom Browne — while Yousefzada said the show “Frida Kahlo Blooms” at the New York Botanical Garden, which he saw earlier this year, inspired his latest collection.

Choi, meanwhile, was flying the flag of fellow designer Jonathan Anderson. Dressed in an edgy-looking white coat with statement buttons of varying sizes, she said. “I’m a big fan of design — it’s the only thing that really gives you energy.”