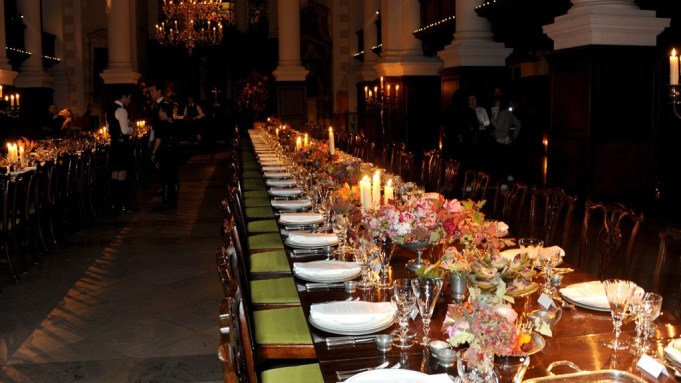 Alexander McQueen laid out a Henry VIII-inspired feast for a posse of not-so-starving artists on Thursday night at Christ Church Spitalfields, in east London.

“All I wanted tonight was to be in bed, eating and watching ‘Downton Abbey,'” said the artist Simon Fujiwara, as he tucked into a bowl of cauliflower cheese with a toasted hazelnut crust. “And I got it all — in 3D — except for the bed.”

The Nicholas Hawksmoor-designed church is loaded with meaning for team McQueen: It was the venue where the late Lee Alexander McQueen presented his fall 1996 Dante collection. McQueen is an associate sponsor of the annual Frieze Art Fair for the first time. It runs through Sunday.

“We have such fond memories of this place,” said Sarah Burton, “and Lee loved Frieze. He would go every year, and now the team always goes. It’s such an inspiration.”

The evening ended with performances by the London Community Gospel Choir.

Meanwhile, at the Etro store on Bond Street, the tongue-in-cheek works of Indian art duo Thukral & Tagra were hanging along the stairwell for a party to celebrate Jiten Thukral and Sumir Tagra, with whom Etro has collaborated on a collection of leather goods.

The 11 pieces, ranging from satchels to iPad cases, feature the artists’ graphic take on Etro’s signature paisley motif through an intricate tessellation. Printed on top of the pattern is a surreal floating island of verdant plants, a white house, and some incongruous candy canes.

Thukral & Tagra’s work is to be shown as part of a group show, called “Island”, at the Dairy Art Centre in London until Dec. 8.