By Samantha Conti and Julia Neel on May 6, 2016
View Slideshow 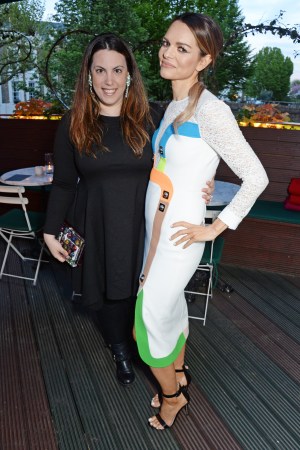 TOTO’S TOAST: Architectural restorer and native son of La Serenissima, Toto Bergamo Rossi was in London this week beating the drum for his native city and marking the launch of his coffee table book, “Inside Venice.”

In the book Rossi spotlights the places that are accessible to him — and his international jet-set pals — as well as secret ones that anyone can visit.

“A lot of people think Venice has sunk but it’s not, it’s still there,” he said. “And the people who do go, they think it’s just St. Mark’s Square, so I wanted to show my own Venice, a beautiful portrait of private houses and the treasures that are open to the public that nobody knows about and where nobody goes.”

Flipping through the book, published by Rizzoli, Rossi pointed to the sacristy at San Marco, the Canton Synagogue, the State Archives and the Santa Fosca pharmacy.

“I am just utterly in love with him,” said Jenny Beavan, the Oscar-winning costume designer who was among the guests at the Royal Academy party on Thursday night. “We fell in love when we were both staying with James Ivory at his place on the Hudson just six months ago. We were calling each other ‘caro’ [dear] straight away.”

They certainly had plenty to bond over: Beavan had spent six months in Venice when she was in charge of the costumes for “Casanova,” starring the late Heath Ledger.

The book features lush photography by Jean-François Jaussaud of 72 properties. Most of the interiors have never been seen before by the public.

“It’s an annual, and a love list,” said the exuberant Garnett, who was inviting one and all to the launch at Dover Street Market.

Hatzistefanis, the founder and owner of skin-care and makeup brand Rodial, said there was no agenda to the dinner and the crowd was more personal than professional. Conversation ranged from schools to spinning to eyebrows (of course).