Londoners Turn Out for Royal Academy of Arts Preview Party 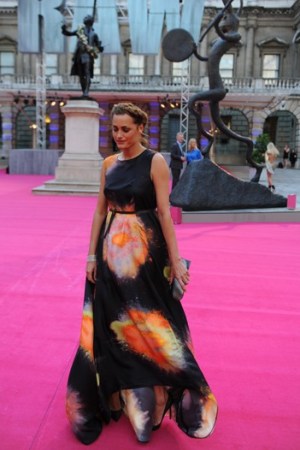 Hundreds of art lovers turned out on a sticky London evening to eyeball — and buy — a riot of artwork on display at the Summer Exhibition at the Royal Academy of Arts. The annual show’s preview party is a highlight on the London summer social calendar, and the show itself has been taking place, uninterrupted, for the past 242 years.

“It’s not just about the spend — it’s about the get,” said Soros, who had already snapped up a painting early in the evening.

“It’s the ultimate democratic exhibition. Each year I buy a memento,” said Hindmarch, who this year purchased a hand-drawn print of London.

Yasmin Le Bon laid down some ground rules before walking into the vast show that stretches across the entire first floor of the Academy. “You can’t really buy a painting just because it matches your dress. You can really come undone with that kind of strategy,” she said.

“I’ll swap a dress for that painting over there of the pussycat with the hat,” said Osman Yousefzada. Felicia Brocklebank, who splits her time between London and her family’s Tudor-era home in the English countryside, said she has a lot of wall space to fill. “We’ve got a lot of bathrooms, and the scullery, and the back staircase, of course,” she said with a smile. “I have my eye on that blue painting over in the corner.”

Gryason Perry, who was exhibiting a work at the show, was more concerned with fashion. Dressed in a sculpted white silk robe he’d made and embroidered himself, a shiny gold penis sculpture positioned between his legs, he mused about the way people dress today.

“Historically, I think we’re at a low-point with regard to costume,” he said. “I mean, come on, the wardrobe options are there.”