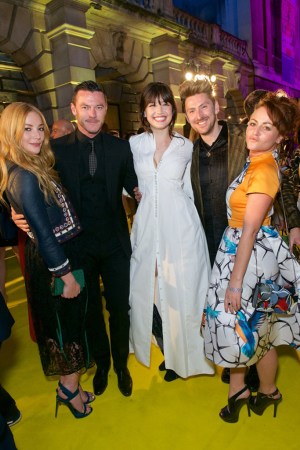 LONDON — Never one to vanish into the crowd, Grayson Perry was in his full peacock splendor at the annual preview party for the Royal Academy’s summer exhibition in London.

The artist and transvestite known for his knockout wardrobe was working a Big Bird look on Wednesday night, with burnt orange platforms and a screaming yellow tulle tiered coat created by one of his students at Central Saint Martins.

“There is a slightly piña colada-ish vibe going on tonight — and I wanted the outfit to be all about color – because I get photographed a million times,” said Perry, chair of the summer exhibition preview party, who happily posed with partygoers during the evening.

Guests at the event – where more than 10,000 works by artists from around the world were on sale – included Henry Holland, who did a DJ set during the evening, Nick Grimshaw, Laura Bailey, members of the Le Bon clan — Simon, Yasmin and Amber — Nick Rhodes, Vivienne Westwood, Dan Stevens and Edie Campbell.

Grimshaw also had clothing on his mind — but not of the Perry kind. The British TV and radio presenter is unveiling his first collection for Topman this week. “It’s everything except for pants,” said Grimshaw, who admitted he’s not very good at designing them, and he doesn’t like the look or feel of new jeans.

In a neighboring room, Westwood admitted that she’s no fan of contemporary art. “It’s dreadful,” she said, looking around one of the galleries. “People have had no idea about art or culture for the past 100 years! I came here for Grayson.” Asked to name some of her favorite artists, she said: “Titian, Francis Bacon, Picasso and Matisse — it ends there.”

The show was coordinated this year by Michael Craig-Martin, while Jim Lambie covered the steps at the academy’s entrance with a series of thick and thin bright vinyl stripes resembling swirl lollipops. In addition to works submitted by the general public, there were those by Wolfgang Tillmans, Richard Long and Ron Arad. Money raised from the sale of the art goes toward funding the RA’s post-graduate programs.

“It’s unique — there is nothing else like it in the world — and we’ve been doing it for nearly 250 years,” said the English artist and Royal Academician Norman Ackroyd, who helped to shortlist the submissions and hang the works.

“I am a big fan – the Royal Academy is one of Britain’s greatest institutions,” said Rhodes as he sailed through the RA’s courtyard toward the party. Was he in the mood to spend? “Well, that depends on whether there’s anything worth buying,” he said.