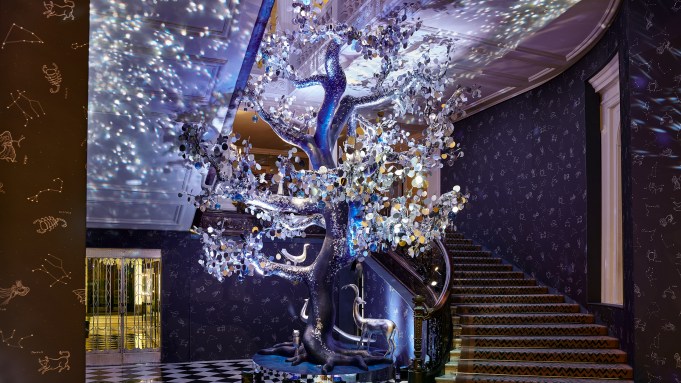 STARRY NIGHT: “Buckingham Palace one night, Claridge’s the next, where else would we ever want to be?” asked London’s vintage princess Virginia Bates from under a sparkling, mantillalike headdress at the party to celebrate Diane von Furstenberg’s Tree of Love.

Von Furstenberg and her cohost, Edward Enninful, pulled together a 250-strong crowd to mark the unveiling of the latest Christmas tree that’s aglow in the lobby of Claridge’s and decked with fruits, birds and animals — with a zodiac motif in the background.

A pattern with 12 star signs covers the walls of the lobby, and extended to the theme of Thursday night’s party, where guests were a transcontinental mix of fashion types, socialites and glittery people.

They didn’t swing on a star — but on a big, white crescent moon, hamming it up for the cameras and draining more than few bottles of Champagne. “We’re going to have a goooood time tonight,” said von Furstenberg, who shimmered in a flapper-ish dress made of long, swingy fringes that she only had made the day before.

Others in the room were taking a break from a variety of creative projects, with Fraser set to publish a book on Lucien Pellat Finet early next year and Hicks writing about his design inspirations, having earlier this year penned a book on Buckingham Palace interiors.

Bohinc, who made her name in London with her big, coiled gold jewelry, has moved onto bigger designs — furniture and objects for the home. “I don’t have to think about size — or weight! It’s a dream.”

Some guests, including vintage fashion expert and former actress Bates, had started partying earlier in the week, filing through the big black gates of Buckingham Palace for a cocktail to mark London College of Fashion’s Better Lives projects around sustainability, diversity and social responsibility.