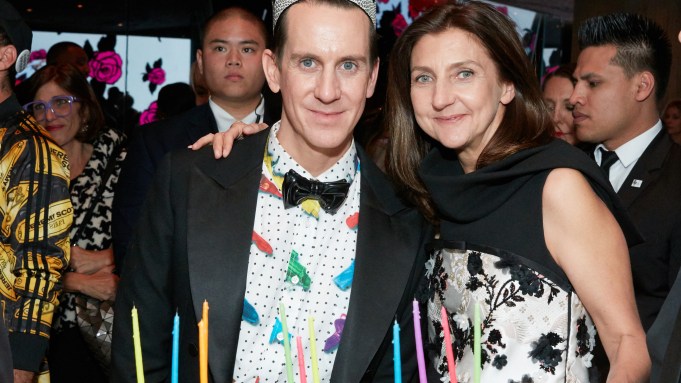 “I know on the outside we may seem very different, but on the inside, we really are very similar,” Jeremy Scott said Thursday night. He was talking about his partnership with Longchamp — indeed, an unlikely match made in heaven — the 10th anniversary of which was being toasted with a party in Beverly Hills. Joined by Longchamp’s creative director Sophie Delafontaine and chief executive officer Jean Cassegrain, the designer reflected on his ongoing relationship with the French luxury brand. “They’re so supportive of artists and creativity and everything that I love,” added Scott, who chooses a new print each season from his ready-to-wear collection to feature on the company’s classic Le Pliage bag. “They give me the freedom to be exactly who I am and bring my creativity to their iconic bag.”

The trio decided to throw the bash at the John Lautner-designed Sheats Goldstein Residence in Beverly Hills as it’s the home that inspired Scott to move out West. “I’d seen it in photos and I would dream about it. Then I started thinking, ‘I want to move to Los Angeles where I could live in a house like that,’” said Scott, who wore pieces from his last collection paired with a tux and Moschino crown. “I feel very fortunate. I also have a Lautner house. Mine is not as amazing as this one, though.”

The home — which features an art installation designed by light artist James Turrell — provided an impressive backdrop for the affair. After a low-key cocktail hour, the party moved downstairs to the clubhouse for dancing, where Kirsten Dunst and Turrell joined.

“I’m sure there will be some dancing, but I’m also eyeing the food. A girl’s gotta eat,” said Pinto. “The thing is, I’ve actually never worn a Jeremy Scott outfit and that makes me very sad. We’ve gotta change that. But I’m obsessed with his prints and sneakers.”

“I remember seeing Jeremy around when I was a little girl in the scene. Like [in my] early twenties, going out,” added Dunst. “He’s one of those epic, original people that have made a career doing what he really loves. Not everyone gets to do that, you know?”

Others on hand and decked out in Scott’s designs were Amber Rose, China Chow and Rosson Crow — who all arrived just in time for Scott to blow out the candles on his anniversary cake. With music blaring hits like Drake’s “Hotline Bling,” Scott sighed, “I hope it’ll be a late night, but I don’t know what time they’ll roll up the carpet and kick us out.”