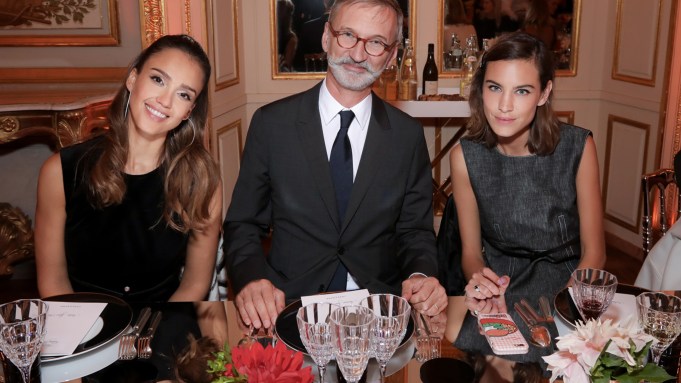 GETTING ONE’S SEA LEGS: Jessica Alba, Alexa Chung and Audrey Tautou were among the guests to celebrate Longchamp’s new flagship in Paris — its largest store in the world – at a cocktail party on Tuesday night, followed by a dinner at the Hôtel de la Marine on Place de la Concorde.

French singer and actress Soko was mixing tunes at the store, a bigger, sleeker and more luxurious version of its historic Rue Saint Honoré flagship. Across the street, the brand debuted its first freestanding men’s boutique, where Frédéric Beigbeder was spinning out songs from the likes of KC and the Sunshine Band.

“It’s a really good vibe,” said Alba. “I really disconnect [when in Paris], although I do find myself doing emails at 3 a.m. as my office is up,” she said with a laugh. The Los Angeles-based actress and entrepreneur is to start filming next month in Los Angeles a series called “Planet of the Apps” for Apple with Gwyneth Paltrow, Will.i.am and social media expert Gary Vaynerchuk. “It’s like a mentor show for app developers,” she explained.

Guests then headed to the Hôtel de la Marine, an 18th-century building a stone’s throw from the store and mingled on the terrace with a stunning view on the sparkling Eiffel tower. They were joined by Chung, Giambattista Valli, Mélanie Laurent, Lambert Wilson and Leïla Bekhti.

“It’s like Versailles here,” said Beigbeder. “No one has ever come here. It’s very rare to be invited. It’s belongs to the navy, the marines,” he explained to a guest snapping pictures.

That was a timely venue for Tautou and Wilson, co-starring in “The Odyssey,” a biopic of the French naval officer Jacques Cousteau, also with Pierre Niney, slated for a release in France on Oct. 12.

“I play the wife of Commandant Cousteau, Simone, who was in the shadow but spent 40 years on the Calypso. She was the true captain, a sailor at heart,” said Tautou, who shares the same passion for the oceans as her character. The actress also just wrapped up the filming of “Going Places” with John Turturro, Susan Sarandon and Bobby Cannavale in Brooklyn. “It’s a variation, not a remake of ‘Les Valseuses,'” she said.

Laurent who’s to start shooting “Mon Garçon” (or ‘My Boy’) with Guillaume Canet in November and direct a film in the U.S. next year, tends to get seasick. “I went on a fishing boat with Greenpeace at 5 a.m. once. I wasn’t feeling great,” she said.

“You couldn’t have come with us to Antarctica then [for ‘The Odyssey’]. It took three days to go from Ushuaia to Antarctica. Waves were 26 feet high and there were storms,” Wilson told Laurent. Cousteau had a strong sense of image, Wilson noted. “He wanted the Calypso crew to be immediately recognizable with the red hat. He added a stripe to the divers’ jumpsuits— very James Bond —and in the Seventies, he even asked [Pierre] Cardin to design his outfit, which involved a pointy collar, peacock blue and white turtle neck,” Wilson explained.

“I have my sea legs, as long as I can see the coasts,” said Bekhti, who  is to appear in a film that was shot in Morocco starring John Hamm and Rosamund Pike.

“We want to share a true moment of French art de vivre,” said Longchamp chief executive Jean Cassegrain, calling the reopening of the flagship “a milestone” for the company. Dinner was prepared by Michel starred chef Hélène Darroze and Pierre Hermé, followed by a performance by singer Imany and more Champagne.

“It’s pitching up and down,” joked Beigbeder.