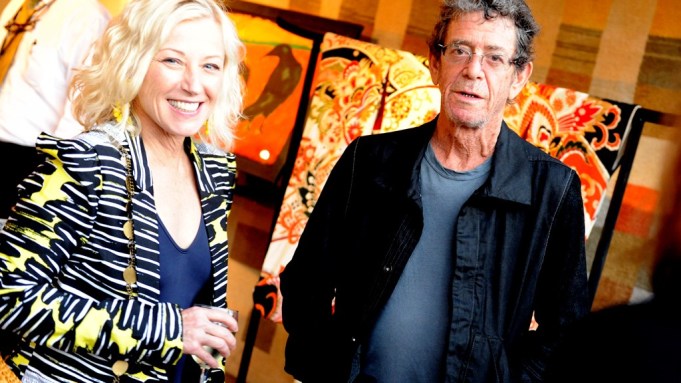 LongHouse Reserve (the 16-acre museum and sculpture garden in East Hampton, N.Y.) threw its annual summer gala Saturday night, honoring founder Jack Lenor Larsen (on his 85th birthday), as well as Dorothy Lichtenstein and Robert Wilson. Lenor Larsen circulated the party in a marigold yellow silk jacket, carrying a quarter-sized plastic object in his right hand which periodically flashed. “I’m very proud [of the museum], and very happy to have everyone here today,” the founder said, spotting some friends in the sea of revelers (the invitation had directed guests to “Compose Yourself in White, Black and a Touch of Voguish Yellow”). “Eighty-five feels fine,” Lenor Larson added.

The museum was hung with works up for auction, among them a black-and-white beach scene by Renate Aller and a photograph of Andy Warhol by Patrick McMullan. Teepeelike structures made of wooden poles (secured at the apex by sunflowers) topped low-lying seating areas, for a summery “Plains-Indians-cum-modern” feel.

Guests took the dress code and ran with it: some wore black taffeta capes and headdresses, long white lace dresses or highlighter-yellow Afro wigs. One man wore a crisp white suit and pageboy cap he had painted over in the style of Mondrian’s “Broadway Boogie Woogie.” “Where’s Bill Cunningham?” one guest asked, “‘We would’ve made it.” Laurie Anderson and Lou Reed dodged press, as did a late-arriving Kim Cattrall. Wilson was on hand, surveying a dance performance amongst the hedges. The press materials had described him as an “avant-garde visionary.” “That’s always nice to hear,” Wilson laughed. Was he excited for his annual Watermill benefit the next weekend? “Of course,” Wilson said, before being grappled by a few partygoers and pulled toward the stage, where a pair of women wearing long, gold finger-pieces cavorted.

Entry to the party was marked by six performers clad in white flowing pants, gold bikini tops and turbans who were gyrating rhythmically in a field. They were later seen, deeper into the party, performing what looked very much like Falun Gong exercises. Two aerialists were employed at the party, one hanging rather limply from the museum’s roof while another wore an emerald green tutu and twirled further out amongst the gardens. Dinner was en plein air, adjacent to the property’s enormous lily pond, and featured an auction and subsequent performance by Philip Glass. The pathway to the valet parking was lined with metal sculptures of a man holding his ears and screaming.