The brands celebrated their lipstick tie-in Thursday night at a party in Paris. 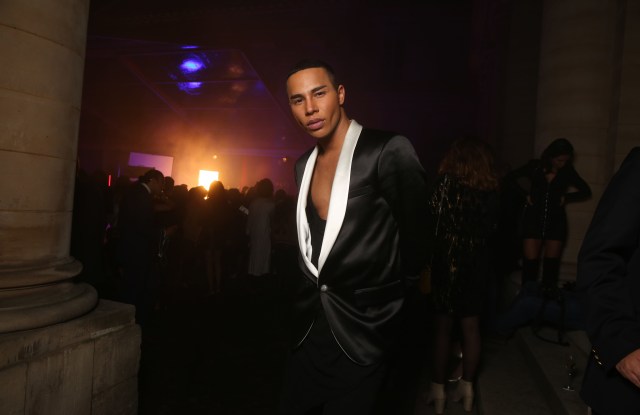 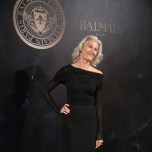 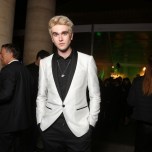 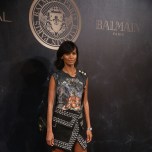 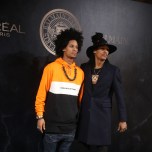 L’Oréal Paris and Balmain painted the town a rainbow of shades Thursday night to fete their lipstick tie-in, commandeering the immense central courtyard of a Paris university building and some of its majestic rooms.

“What was really surprising to me is that I didn’t know that creating a lipstick was like creating clothes,” he said, explaining each takes perfectionism — working hard to make a perfect tone, the right balance and proportions.

“At the same time, what was really interesting, as well, is becoming the face of cosmetics,” the designer continued. “I…am part of the campaign. [I’m also] empowering women, which I do in my fashion, and have the chance to do that in the cosmetics world. That’s something really new and interesting.”

So has his appetite been whetted to delve further into the beauty industry?

“Of course. Balmain always has been part of glamour and beauty in so many ways,” said Rousteing. “So I really feel like right now is just the beginning, an incredible collaboration and an incredible moment.

“I can’t wait to show you what’s going to happen next,” he teased.

Crowds thronged into the venue giving on to the tony Boulevard Saint-Germain. The partygoers sipped Champagne while checking out a vintage Cadillac parked in the middle of the festivities and the giant screens showing advertising for the lipsticks on a loop.

Among the guests were Pamela Anderson, Courtney Love, Marie-Ange Casta, Liya Kebede and Ellen von Unwerth, plus a bevvy of models.

The subject of lipstick was, of course, on everyone’s lips. “I love all kinds,” enthused Soo Joo Park. “I love a good bright red lipstick for a nice, sexy evening out.”

But in a twist, this particular evening she was wearing two lipsticks from the L’Oréal Paris x Balmain collection — Freedom and Rebellion — on her eyelids. “It matches the dress,” she said, adding: “I like to be rebellious and free, so it’s perfect.”

Grace Bol generally opts for red or burgundy lipstick. But here she was wearing blue. “It’s called Brilliant,” she said.

Cindy Bruna shared she’s into burgundy. The model and Maria Borges were fresh off Balmain’s catwalk earlier in the day, which was at the Palais Garnier. “It’s amazing,” said Borges of walking the show there.

Gabriel-Kane Day-Lewis revealed he is working on his first album. “I’m signing with a record label in Paris,” he said, describing his music as “soul pop, rock. “

French dance duo Laurent and Larry Bourgeois (aka “Les Twins”), meanwhile, are working on music of their own and will be in a movie set for release next year.

L’Oréal Paris keeps ramping up its link with Paris Fashion Week, which was in full throttle by Thursday.

“I believe that beauty and fashion are inseparable,” said Pierre-Emmanuel Angeloglou, L’Oréal Paris global brand president, adding both are on the forefront of trends.

”I think that this collaboration with Balmain — beyond the importance of fashion — is really about sharing and collaborating with one of the most iconic French designers,” he said.