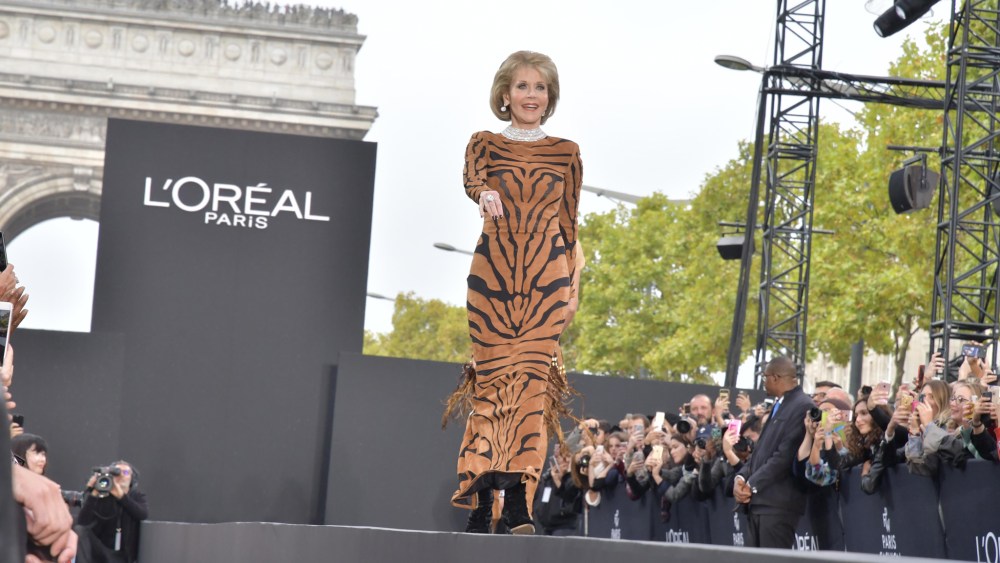 L’Oréal Paris transformed the Champs-Élysées into a giant catwalk Sunday afternoon, closing down the famous avenue to showcase beauty and fashion looks for the public.

Crowds lined up behind barriers down the thoroughfare, braving a drizzle, to see the event, during which brand ambassadors from Jane Fonda and Helen Mirren to Doutzen Kroes and Liya Kebede, and models including Winnie Harlow strutted their stuff down a long runway.

“I’m really excited and nervous,” said Fonda backstage before the show, which she was to close wearing Balmain. “I’ve walked a runway once for charity, but I’ve never done it [for] real. So I’m scared I’m going to fall down,” she added.

Fonda said it was an unexpected honor when L’Oréal Paris approached her to be the face of its Age Perfect skin-care line years ago. “It was a big surprise for someone who never particularly was thought of as a fashionable person,” she said.

Her schedule has been chockablock, having recently wrapped “Book Club” with Diane Keaton, Candice Bergen and Mary Steenburgen, in which she plays “the role of a very sexy woman, who was worried that her friends have given up on relationships and sensuality.”

Fonda also stars in a just-released flick with Robert Redford, called “Our Souls at Night.” “It’s gotten very, very good reviews,” she said. “So I’m excited about that, and we start a fifth season of ‘Grace and Frankie’ in February.

“It’s just funny because I’m really, really busy, and then there’s this sudden little…window of time to do this extraordinary thing out of the blue that’s never happened before,” continued Fonda, referring to the catwalk event. “And I thought: Fine, let’s do it. It’s fun.”

“It’s huge. When they first told me months ago, we want to do a fashion and beauty show on the Champs-Élysées, I was like ‘yeah right, that’s never going to happen,’” said Kroes backstage. “They did make it happen, and I still can’t believe it. They’re blocking off a whole street.”

“It’s the very first time there has been such a show open to all on the most beautiful avenue in the world,” explained L’Oréal Paris global brand president Pierre-Emmanuel Angeloglou. “For us it’s very important because it corresponds to our mission as a brand, to bring the best in beauty to all, to make it accessible.”

“I’m kind of nervous about it to be honest. It’s a big deal. It’s the show of the season in a way,” said Kebede beforehand, admitting she was excited to be walking with Fonda in particular. “It’s a twist on the catwalk in a way, showing the importance of hair and makeup on runways, and this is an interesting way to [do] it.”

The Ethiopian model and businesswoman, one of 17 L’Oréal Paris ambassadors taking part, said she appreciated the brand’s inclusive approach, which extended to the diversity of models — professional or otherwise — walking the show.

Judging by their reception, it was a close tie between Fonda and Harlow when it came to the popularity stakes if the cheering was anything to go by.

The democratic approach was tangible on the runway, with models waving to fans and greeting each other as they shimmied down the 200-foot-long stage, while two giant screens broadcast their progress for members of the crowd who were too far away from the catwalk to see it clearly.

Simultaneously, the event was transmitted online, including from L’Oréal Paris’ social media platforms.

“It’s great that they’re making it democratic,” said Haider Ackermann, among the designers involved in the project, with five looks from his fall 2016 collection showing. “It’s very strange to be on the other side of things,” he said of his front-row seat, however. “I’m more comfortable when I’m backstage.”

Other front-row guests included Naomi Campbell, who slipped in at the last minute, and Balmain’s Olivier Rousteing.

“I’m so happy to be here and to enjoy the L’Oréal family,” said the designer, who on Thursday night feted Balmain’s capsule lipstick line done in conjunction with L’Oréal Paris.

Also sitting by the runway were actresses Aymeline Valade and Marie-Ange Casta, and dance duo Laurent and Larry Bourgeois (aka Les Twins).

“The idea of the makeup for the show comes from the idea of irreverent [Parisian] chic,” explained Garland, saying they came up with eight variations, including “boho,” “arty” and “casual.” That said, each woman modeling was to have her own iteration of the look.

Garland used L’Oréal Paris from the past, like a colored lip gloss; present, including lipsticks from the tie-in with Balmain, and future. She couldn’t divulge much about the latter, but teased: “Let’s say shine — shine in all its futurism. Shine covers liquid, covers metallic.”

A challenge was some of the quick makeovers needing to be done. “We’ve got models that open the show, [then] appear a bit later in the show, so within 15 minutes we have to change looks,” said Garland.

“It’s a real challenge, because we have five minutes to change,” Lancien agreed. “For example, Doetzen opens the show, [with a] very cool look, very trendy, like Isabel Marant, and she finishes with Balmain, and Balmain is very glamorous, with a lot of makeup, beautiful shiny hair.”

For Ungaro, Giambattista Valli and David Koma, Lancien created a French twist with a Bowie-esque front. “I love the mix,” he said. “The inspiration for this was the beautiful movie with Catherine Deneuve and David Bowie, ‘The Hunger.’”

For Olivier Theyskens and Pallas, Lancien said he created something “pure and graphic, with a lot of gel in the roots, and we keep the tips completely free. But to be more artistic, to give something interesting, we decided to paint the hair blue or pink with Colorista [hair color]…just one strip on one side only to be more conceptual for these designers.”

Some 60 makeup artists and hairstylists worked behind the scenes on the looks, and then the runway event was followed by hair and makeup master classes led by Garland and Lancien.

Also nearby were four hair and makeup booths, where fans could check out products and get touch-ups.

For more, from the show, see: