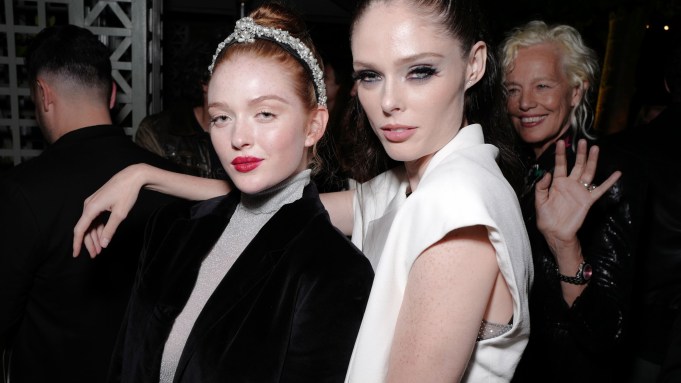 GARDEN PARTY: To celebrate a collaboration with Kate Moss, Zadig & Voltaire hosted a garden party at the Ritz, bringing in Lou Doillon for a private performance.

“It was amazing, I mean I love Lou Doillon, she’s wonderful, very personal, very outspoken,” said Ellen von Unwerth after the show, while Doillon huddled nearby, barely out of earshot, with Moss and Eva Herzigova in a nook in the garden.

Coco Rocha and her husband James Conran were catching up with Larsen Thompson.

Rocha had walked the Christian Siriano show, and she and Conran were traveling with their kids — one aged four, and the other a year-and-a-half old.

“We have our babies here so we had a play date — got in the carousel and did all that fun stuff and now, events nonstop,” she said.

“So they will be waking up at six,” she added, not looking too concerned at the prospect of a short night. But she was surprised to bump into von Unwerth.

“I’ve a shoot with Ellen tomorrow, so I was like, why you up?” she laughed. Rocha and Conran are busy these days with their model camp, which they plan to take to Canada. They host aspiring models from around the world — all body sizes, skin colors and ages, with the last batch of participants coming from 12 countries to teach them about the runway, as well as their rights.

Thompson, meanwhile, will soon be traveling to Thailand to shoot the rest of the Pandora jewelry campaign about empowering women and promoting self-expression — all themes she relays on her social platform, she noted. Her first feature film, “Blood Line,” a horror movie with Sean William Scoot, just opened, and she plays in another movie that will go to the Sundance Film Festival next year.

“I play the mean girl, which is something so different for me — I’ve never played a mean girl role so it’s definitely a challenge but very cool because you learn so much from every character you play,” she said.