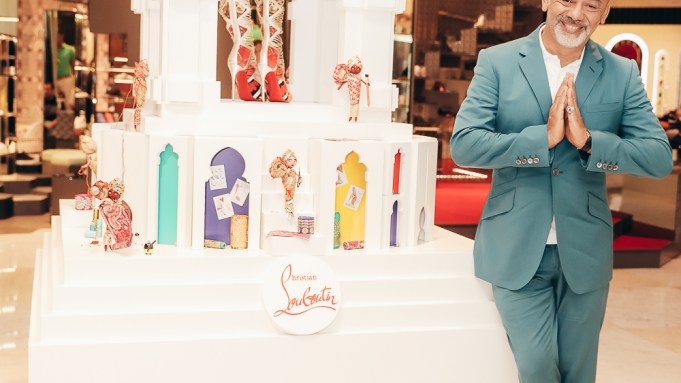 DUBAI — Christian Louboutin landed in Dubai this week on a visit to pay homage to a country he has had a lifelong love affair with.

“I discovered India through the Bollywood films and music I watched as a young child growing up in Paris,” he said during a personal appearance at Level Shoes in Dubai Mall, part of the store’s “Dear India” campaign. Louboutin first traveled to the country at 16 and visited every year for the next several years. “I would spend three months at a time going all over India, traveling by train.” The designer said the country has been a constant source of inspiration for him.

Louboutin is launching his global collaboration with his friend, Indian couturier Sabyasachi Mukherjee, which will be available exclusively in the Middle East at Level Shoes. “It is nice to bring the work that I’ve been doing for the Sabyasachi collaboration here to Dubai, as the bright light of the city brings a beautiful exposure to the rich work. There is a common thread between India and the Emirates — on how the bright sunlight reflects on the gold and embroidery details and textures that are not flat.”

Later that evening, Louboutin welcomed an exclusive group of ladies to a private dinner in the presidential suite of the Taj hotel in Dubai, overlooking the sparkling lights of the Burj Khalifa. Guests including artist Aisha Khalid, Sonali Punj, Minal Bodani, Isha Uberoi, Lamees Hamdan and Medha Nanda came dressed in their finest traditional Indian wear.

The designer wore a traditional brocade bandhgala waistcoat by Sabyasachi for the dinner.

Like his relationship with India, Louboutin said the friendship and collaboration with Sabyasachi happened quite naturally. “I was walking in Mumbai and came upon these maroon doors, very beautiful. I saw the name Sabyasachi and I was familiar with his work so I wanted to go in to buy myself a kurta. He was in the store, so we met.” As the friendship grew, Louboutin visited the atelier of Sabyasachi in Calcutta where he discovered rooms full of archive fabrics and embroideries. Then the idea was born to combine his rich textiles with Louboutin’s craftsmanship.

For Louboutin, collaborations are an important way for him to showcase a part of the world that has left an indelible mark on his work. “India has so much to offer through its food, spirituality, how kind the people are, the architecture and jewelry which is so powerful.”