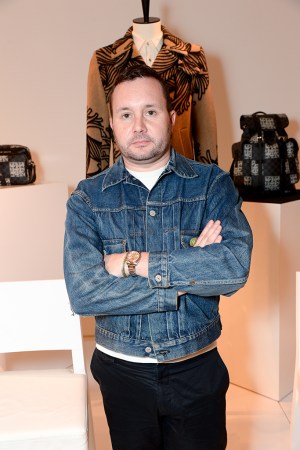 “I think he’s the most important designer to come out of London alongside Vivienne Westwood,” said Kim Jones, artistic director of the brand’s men’s collections.

“He is Savile Row, he is the street, he is the club,” added Jones, whose fall-winter ready-to-wear and accessories collections were inspired by Nemeth. “His designs define London. He trained as a fine artist and came into fashion from being an illustrator, and that chimes with how I started. I can see the influence of his work in so many collections, and yet it is not often acknowledged and still seems unknown to many. That’s why, as we approach the fifth anniversary of his death, I wanted to openly celebrate his life and work this season at Louis Vuitton.”

The evening had begun with a conversation between Jones, accessories designer Judy Blame and Tim Blanks. Blame said if Nemeth were still alive, “he would have made the Vuitton technical people mental. Because Chris is so hands-on he would want to know how the machine worked, where the leather came from, or [why] this canvas isn’t tough enough. He would have driven them mad.”

Jones also unveiled his curated bookshelf at the Louis Vuitton Bookstore, which will be on show during London Collections: Men. It features titles including “A Kid Could Do That” by Nellee Hooper, “Jungle Fever” by Jean-Paul Goude, “Conversations With the Dead” by Danny Lyon and “The Farm” by Jackie Nickerson.

As reported, Louis Vuitton will also mount a pop-up for the Nemeth-inspired collection at Colette during Men’s Fashion Week in Paris. It will run from June 22 to July 18.