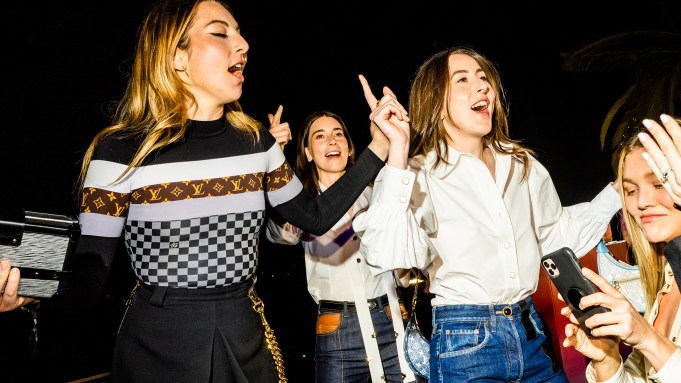 Louis Vuitton used L.A.’s magic hour as the backdrop for the celebration of its new City of Stars fragrance at the spectacular Dolby Terrace of the Academy Museum of Motion Pictures, with the Hollywood Hills and sign fanned out below.

The fourth of the French luxury house’s scents inspired by the City of Angels (following California Dream, On the Beach and Afternoon Swim), the new nighttime fragrance has a sweet, citrusy punch, with winter lemon as a top note, lime sparkling at the heart; blood orange, red mandarin and bergamot softened by tiare flower, with a musky sandalwood undertone.

For the project, Vuitton master perfumer Jacques Cavallier Belletrud once again collaborated with L.A. contemporary artist Alex Israel, who created an original painting of the sun setting over L.A. from the vantage point of Mulholland Drive. (Movie fans might remember a similar scene in the film “La La Land.”) That work inspired the fragrance bottle and packaging, in gradient blue, lavender and pinks.

“It’s the perfect sunset moment when the stars are not in the sky but on the ground…the stars of the city are its people,” said Israel, during the fragrance reveal to guests seated in directors chairs. He and Belletrud waxed poetic about L.A., where the perfumer said he can smell everything from the night jasmine to the actual sunlight. “The art of fragrance is creating the addiction,” he said of his latest tonic.

As the sun set in colors perfectly matched to the perfume, cocktails were served, including an ombre pink tequila, grapefruit and jalapeño concoction that Chloë Grace Moretz likened to “a chic Slurpie.”

“Alex said the guest list was some fashion people, some influencers and some friends,” said writer and art collector Maria Bell, a longtime champion of the artist, who in addition to Vuitton, has collaborated with Rimowa, Vilebrequin and Snapchat.

Influencers decked out in Vuitton, including Chriselle Lim, Brittany Xavier, Marianna Hewitt, Eve Jobs, Fai Khadra and Noah Beck, took turns sniffing the new fragrance and posing for selfies against the picturesque backdrop, where the opening night gala for the Academy Museum was held back in September, with Lady Gaga performing in the same spot.

The crowd was indeed a mix of the older and new guard, with Bell, Beck (the singer, not the influencer), the Haim sisters, Wolfgang and Gelila Puck sitting with Israel at the head dinner table.

A longtime fashion lover herself, Gelila Puck called over her son, Oliver Puck, all of age 16, from another table, sharing that he was scouted on the streets of Paris to be a model (he’s not so sure). She reminded the young Puck of a lunch they have planned with L.A. designer Rhuigi Villaseñor, the new creative director at Bally, joking that if Rhuigi wants Oliver to model, he has to take Mama, too. “I love all the people coming up,” she said of the buzzy L.A. fashion scene.

Other guests included Maria Bakalova, Miguel, ASAP Nast and up-and-comer Taylor Zakhar Perez, who bared it all on the HBO hit “Minx.” When dessert arrived, a baked Alaska designed by Israel himself, down to the chocolate palm tree garnish, some ordered another round of chic Slurpies to go with it.

Holding court at one of the press tables, Belletrud regaled diners with stories about his career, from creating the iconic 1990s era fragrance Eau d’Issey (Issey Miyake dressed Belletrud and his wife for their wedding), to working alongside his daughter Camille, teaching her the craft that goes back generations in his family.

Belletrud joined Louis Vuitton in 2012, and lives in Grasse. But L.A. has always felt like a second home, he said, noting its similarity to the South of France. “I’ve often thought to establish a lab here,” he said.