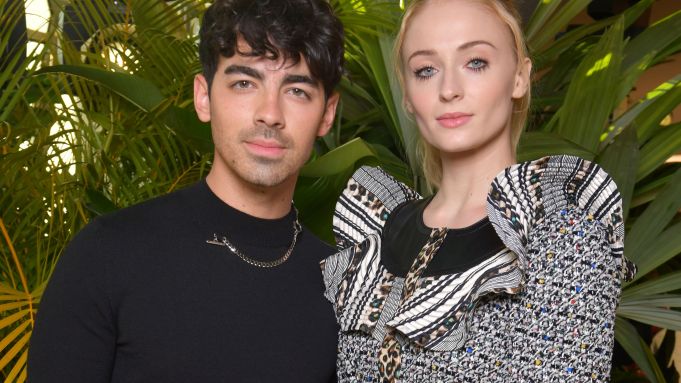 The scene was familiar — curbside at JFK, traffic backups galore, a sense of urgency about. But in place of the usual airport garb and taxis were Louis Vuitton ensembles and chartered black SUVs far as the eye could see.

Vuitton had taken to the TWA Flight Center at JFK Airport for its latest cruise collection show, and with it came the usual droves of VIPs loyal — and contracted — to the brand.

Emma Stone, in a silky teal turtleneck and white trousers, played with a black security dog on the sidewalk outside of the venue ahead of showtime.

Inside the TWA Flight Center, the abundance of plants Vuitton had assembled and the bird sounds playing overhead transmitted a rather zen-like pre-show vibe, unusual for both a fashion show and also the airport.

Newlyweds Sophie Turner and Joe Jonas chatted up Nina Dobrev after obliging photographers with couples photos. Connelly brushed off interviews before greeting Mark Ronson enthusiastically with cheek kisses. Ronson spotted Jonas nearby and reached out for a handshake.

“Were you with Billy Eichner yesterday? Doing ‘Billy on the Street?’” he shouted over.

Laura Harrier, from her perch in the front row, said her latest jet set adventures have been all for work, between New York, Los Angeles and London.

“I am going to Italy next month though, to the Amalfi Coast, so that’ll be fun,” she said. “I always do carry-on, no matter how long I’ll be gone for. I always make it fit. I hate checking bags and waiting or it, so I try and pop in and pop out.”

After the show, Justin Theroux fought his way against the grain to go see Nicolas Ghesquière, a vape in hand and a camera, inexplicably, slung over one shoulder.

Curbside it once again felt like a true JFK experience — albeit a very chic one. Connelly and Michelle Williams strolled out in conversation, surrounding publicists making quick work of locating their getaway cars.

Those unfazed by the hour-plus they’d just spent in rush hour traffic making it out to JFK headed over to MoMA PS1, where the after party picked things up. Theroux was there, grabbing a drink solo from the bar; Alicia Vikander sipped a Moscow Mule, while Stone headed for the food.

Rising actor Cody Fern, like Harrier, said he likes to keep it simple while traveling.

“As comfortable as possible,” he said, Lizzo playing from the speakers overhead. “I’m an Issey Miyake Pleats person, with like a black turtleneck. Something really simple. And shoes, always comfortable shoes. The Balenciaga speed runners, but it’s a bit tired.”

The self-proclaimed Ghesquière superfan — it was his first fashion show, he said — also made his Met Gala debut on Monday night, wearing Margiela.

“Bizarre. It’s wonderful, and it’s bizarre. It’s hard to wrap your head around how weird it is,” he said of the experience. “Leading up to the carpet is always anxiety-inducing, because you’ve got to be on. And I was taking a risk.”

The man of the hour, Ghesquière, made his way in closer to 10 p.m., just as the official after party portion was about to get under way.