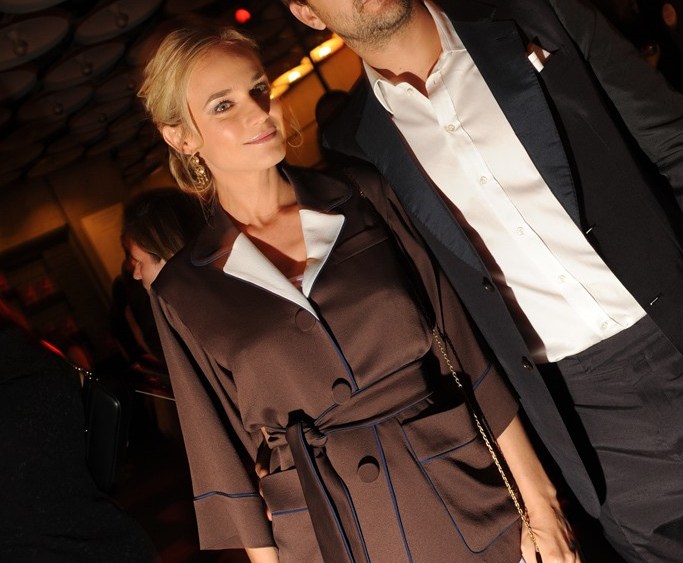 Yayoi Kusama — the prolific Japanese artist who has had her hands in the conceptual, feminist, minimalist, surrealist, Pop and abstract art scenes since her appearance in New York in the Fifties — did not attend a dinner held in her honor by Louis Vuitton at the Whitney Museum on Tuesday night.

It was a preview of her highly anticipated retrospective at the museum, which spans six decades of her work and opens Thursday, running through Sept. 30. Her absence was not entirely surprising. The artist once, after all, called one of her works “I’m here, but nothing.”

She was exhausted, a Louis Vuitton rep explained. There was the time difference from Tokyo, and she’d been up since that morning for the unveiling of the store windows. Several Louis Vuitton shops revealed Marc Jacobs’ collaboration with Kusama on Tuesday, their vitrines (and shoes, handbags, shirts, skirts and sunglasses) wrapped in frenzies of polka dots in her honor. Some windows hold wax figures frightening in their mimicry of her likeness, right down to the orange-Skittle-colored wig. There was also the matter of Kusama’s wheelchair and all the excitement, and she does, after all, live in a mental hospital most of the time, the rep added.

“She’s not coming tonight. I mean, she lives in a loony bin in Tokyo — by choice,” Zac Posen nodded authoritatively.

“You can do that?” Lauren Santo Domingo asked, queueing with her husband, Andres, Olympia Scarry, Sofia Coppola and newlyweds Margherita Missoni and Eugenio Amos for the first part of the exhibition, Kusama’s “Fireflies on the Water” installation.

“You can live in a mental institution and leave whenever you want?” Santo Domingo continued. “Maybe I’ll do that….I’d feel so normal.”

The Whitney was done up in dots for Kusama, with a pair of DJs in full polka-dotted Harajuku-girl getups and gigantic red balloons (also polka-dotted) suspended above the banquet tables on the garden level, and the exterior lower wall of the museum was covered in shiny crimson versions like a panel of buttons. Napkin rings were clasped with white and red badges that read “LOVE FOREVER — KUSAMA.” Diane Kruger and Joshua Jackson admired the decor from their seats.

“I don’t know if the balloons are staying after tonight — I’m only the director [of the museum]…” Adam Weinberg laughed. “If they’re not, I’ve got a 14-year-old daughter who’d love one.”

As dinner, which was cosponsored by W magazine, wound down and guests like Dianna Agron, Amy Sacco, Kaya Scodelario, Martha Stewart and Scott Campbell began heading upstairs to the lobby for silver cups of mint julep and a performance by Blonde Redhead, Waris Ahluwalia took to the fourth floor to survey the rest of the exhibition, pausing over Kusama’s letter to Richard Nixon, which offered him a sexual romp in exchange for ending the Vietnam war, her Sixties self-portrait photographs, advertisements for her orgies and several of her sculptures. Despite her awards, her multiple major museum retrospectives and the records she’s set for auction prices as a living female artist, Kusama still refers to herself in her autobiography, “Infinity Net,” as an “aspiring artist.”

Ahluwalia smiled before heading back downstairs to the party: “Well, that’s the only way to do it if you’re an artist. You’re never finished. Once that’s done, you’re done.”