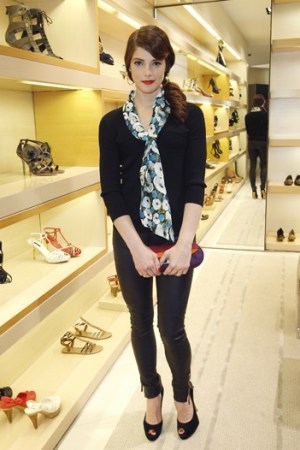 Louis Vuitton and Glamour thew their second annual joint dinner party Monday night on the rooftop terrace of the house’s Rodeo Drive boutique, drawing a slew of starlets, including hosts Ashley Greene, Freida Pinto and Emma Stone, who were each given a one-night respite from their day jobs filming movies.

“I came in just for this,” said Pinto, who just wrapped the Michael Winterbottom film “Trishna.” “I think it’s important to bring in a bit of the fun things, too.”

Stone is in the midst of wrapping the “Spider-Man” reboot, which she called “pretty fun,” and Greene has just two more days of shooting on the final two “Twilight” films.

“I’m surprised at how sentimental I feel,” she said. Greene did several of her own stunts on the films, and said she caught the action film bug.

“It would be great if my next project could be like ’24, The Movie,’” she joked. “Keifer Sutherland, call me!”

At least with her vampire role behind her, she will finally be able to get a tan. “I’ll have to film my next movie in Mexico,” Greene said.

Also in the mix were pairs of pals Jess Weixler and Jessica Chastain, Emma Roberts and Juno Temple, and Dree Hemingway and Xavier Samuel. Glamour editor in chief Cindi Leive surveyed the moonlit scene as she introduced the night’s performer, Sara Bareilles.

“It’s times like these when I can’t recall the reasons I live in New York,” she said.