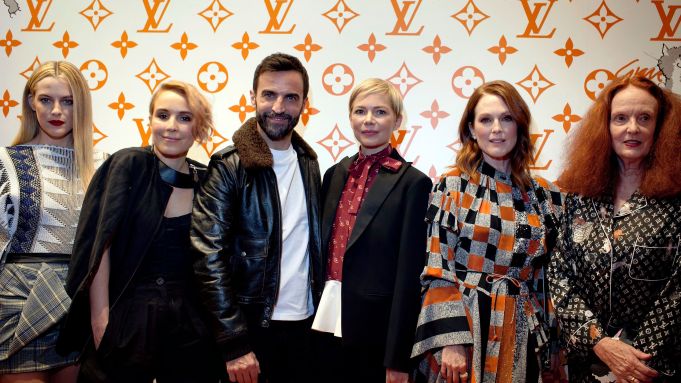 There seems to be quite a number of cat lovers amongst the Louis Vuitton celebrity roster. The brand’s latest pop-up shop, for its cat-happy collaboration with Grace Coddington, kicked off in the Meatpacking District of Manhattan Thursday night with a cocktail in Coddington’s honor.

The famed stylist and editor had snuck a peek at the pop-up the night before, just to make sure everything was up to her standards.

“I’m a control freak,” she said, dressed in a pair of silk pajamas that bore her cat illustrations alongside the LV monogram.

The rooms were lined with monogram wallpaper, with Coddington’s feline illustrations blown up across them. “It’s kind of overwhelming, but it’s kind of funny —because I’m used to my drawings just very small,” she said, looking around.

The collaboration was a longtime dream realized for Coddington. “We’ve been chewing it around for the last, what, three years? But in the beginning I wasn’t really free to do collaborations with people because I was full-time with Vogue. But as soon as I was no longer full-time with them then I could do a few things like this, which makes life really fun,” she said.

Her more recent fluffy companions were of course represented in her illustrations, but so, too, were her first pets — brother and sister felines named Coco and Arie.

“They are here…well, actually they’ve colored them up differently to how they were, but they’re here…they’re the skinny ones, they’re not the fluffy ones,” she said.

And as for anyone who professes to be not a cat person?

“Fine — and then I walk away,” Coddington said.

H&M x Moschino: A Match Made in Fast-Fashion Heaven