By Miles Socha
with contributions from Laure Guilbault
on December 4, 2015
View Slideshow 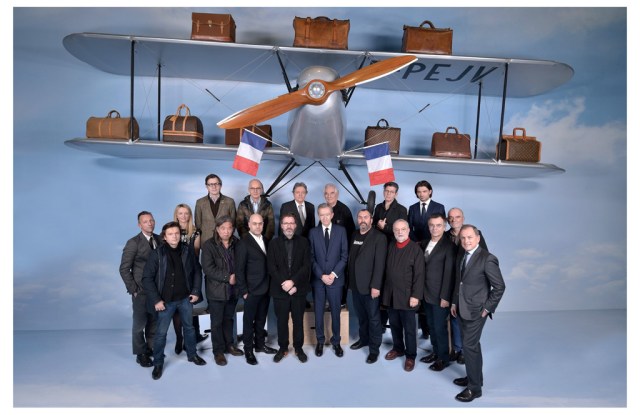 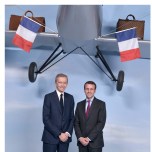 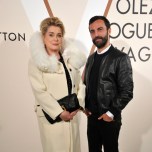 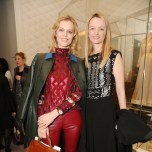 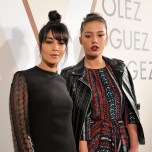 PARIS — The cultural figures that streamed through the new Louis Vuitton exhibition in Paris Thursday night are hardly the carry-on types.

“Try as I might, I’m not a minimalist packer,” said Catherine Deneuve, who toured the sprawling “Volez, Voguez, Voyagez” show at the elbow of Nicolas Ghesquière, Vuitton’s artist director of women’s collections, who steered her to a 1916 automobile trunk done up in a black and navy version of its famous monogram canvas.

Karl Lagerfeld is of a similar ilk. Consider his recent jaunt to Rome to stage the Métiers d’Art show for Chanel in Rome. “It was as if we were taking a trip to America for a month,” the designer said, explaining that he lugs along suitcases full of books, as he tears through several of them simultaneously.

He was admiring luggage and clothes displayed in an ocean liner setting, including a Jean Patou jumpsuit and a row of steamer bags. “You know they brought those to hold dirty laundry during the trip,” he whispered.

“Blue is the Warmest Color” actress Adèle Exarchopoulos said her travel essentials include music, lipstick and dresses. And she has a surefire method for reducing jet lag: “A few drinks — usually gin and tonics — and then I sleep.”

Exarchopoulos will soon be seen portraying a volunteer in the Sean Penn movie “The Last Face” and has signed up for Michaël R. Roskam’s “Le Fidèle.”

“I never pack light — even when leaving for two days, I carry trunks,” confessed actress Elsa Zylberstein, who’s currently promoting the film “Un Plus Une” opposite Jean Dujardin, directed by Claude Lelouch and due in French theaters on Dec. 9. The actress is also to feature in “Le Sac de Billes” (or A Bag of Marbles in English.) “We shot in Prague, with Patrick Bruel and kids. I play the kids’ mother.”

Luxury titan Bernard Arnault beamed as he toured the sumptuous showcase, whose theatrical props include a 70-foot mast and sail, plus a biplane bursting through a wall.

“They all came out for France,” beamed Vuitton chief executive officer Michael Burke.

Emmanuel Macron, France’s economy minister, spent more than an hour at the exhibition, stopping to observe craftsmanship demonstrations and even trying his hand at putting a stitch through a handbag handle.

He also tested the plush sofa of a vintage railway car set with Arnault and the French executive’s wife, pianist Hélène Mercier.

“It’s brilliant,” Macron enthused about the exhibition as he browsed a display of library trunks, musing, “I always wish I can travel with my books.” His next scheduled long-haul flight is to the United States in January for the Consumer Electronics Show.

“I just discovered the blue monogram. I had never seen it,” marveled Berluti honcho Antoine Arnault. “I worked for Louis Vuitton for 10 years. I was almost every week in Asnières delving into the archives.”

Doris Brynner, who was chatting with former French culture minister Frédéric Mitterrand, noted she brings her crackers and tea when traveling, and doesn’t eat plane food. Mitterrand revealed he’s working on a two-hour film on Christian Dior, set to come out early next year.