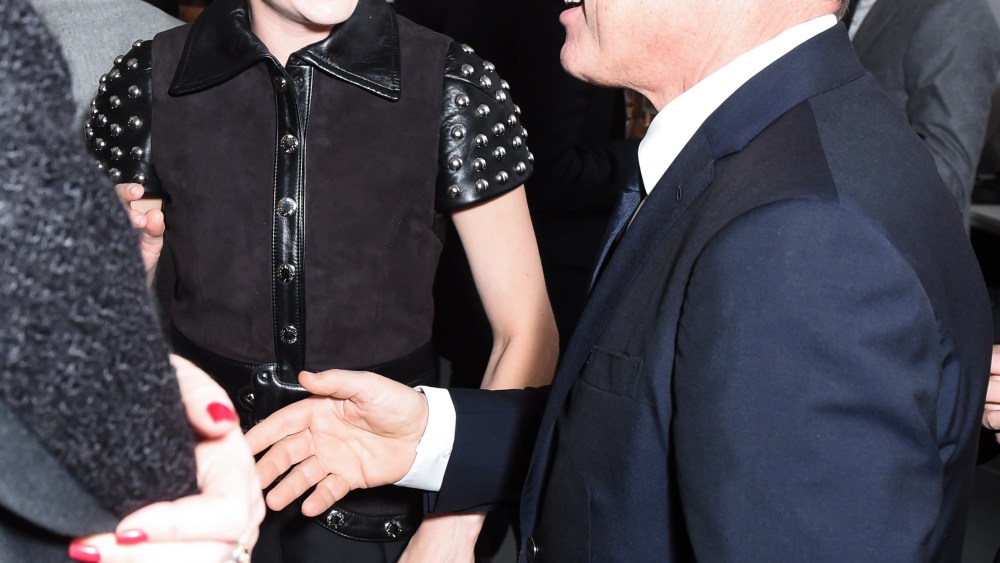 “My friend did it — we did it late at night one night,” Michelle Williams said on Thursday evening. The actress was debuting a new pink-hued hairdo at Jeff Koons’ studio, where the pop artist’s latest bag collaboration with Louis Vuitton was the focal point of the evening.

“I’m excited to hold this little guy,” added Williams, who was toting a clutch from the new Masters 2 collection featuring a work by J. M. W. Turner. “I’m a Turner fan. I like Venice.” Williams is a regular at Vuitton-sponsored art outings, having also attended a dinner for the first part of collection at the Louvre in Paris last April.

“It was really special. Even I took selfies that night, and they’re not normally my thing,” Williams said.

The actress has a busy fall, including filming the Marvel film “Venom.”

“My name’s Ann. That’s all I know now — that’s it,” she said. “I really like the people I’m working with. It’s Tom Hardy, and I just think he’s a genius, so I’m really excited to get into the ring with him. I’m hoping that by the time it comes out my kid will be old enough to see it. It keeps you relevant when you make movies that your kid wants to take their friends to. My daughter’s so excited about ‘The Greatest Showman’ coming out, she like can’t sleep at night,” she added.

Vuitton chief executive officer Michael Burke, who marveled at Koons’ exacting approach, and Delphine Arnault were in town for the launch event, which was cohosted by Garage Magazine. The evening marked something of a kickoff for new editor in chief Mark Guiducci. “The way I think about it is turning on the lights in a new apartment,” he said. “And looking toward our spring issue, that’s when we’ll have a housewarming party.”

“This is my 3-D digital department,” Koons explained during a pre-dinner cocktail, where many of the computers in the room were queued up to renderings of his sculptures. “I do a lot of reverse engineering here.”

His second collection for Vuitton is a continuation of his relationship with the wider LVMH family; he previously collaborated on a bottle design for Dom Pérignon as well.

During the dinner, Koons touched upon the idea of materials as a way to communicate emotion. “When people have feelings, that turns into ideas,” he told the room, which included Jessica Chastain, Alexa Chung, Jeffrey Deitch — and covetable dinnerware. (Each guest got to take home a plate bearing the same artworks as the bags.)

“With the Louis Vuitton Masters Collection, I hope that everybody that sees the collection can feel the presence of my ideas,” Koons added.