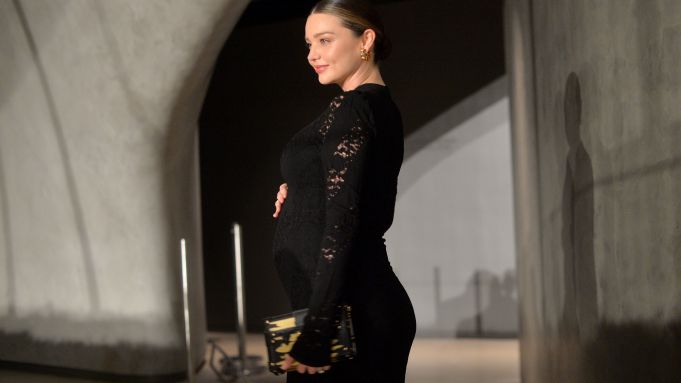 Another major art exhibition was unveiled in Los Angeles on Thursday night, as The Broad and Louis Vuitton celebrated a preview and black tie dinner for “Jasper Johns: Something Resembling Truth” at the downtown museum.

The exhibit, open Feb. 10 through May 13, features 127 works (including seven from Eli and Edythe Broad’s collection) spanning six decades of Johns’ career.

“I’m excited to see, you know, the flag,” said guest Miranda Kerr of one of John’s most iconic works. She and husband Evan Spiegel, like many other westside dwellers, were caught off guard by the crosstown traffic, which shortened the cocktail hour for guests including Karlie Kloss, Dasha Zhukova, Michael Chow, China Chow, Jeff Koons, Ed Ruscha and Mark Bradford. Some, like Ricky Martin and Owen Wilson, missed cocktails altogether and snuck into the dinner tent unnoticed.

Those who did get to admire the art before the meal were surprised to find some never-before-seen pieces.

Many of the art world elite in the crowd couldn’t turn off their own curator instincts. “I’ll art direct this shot,” said Los Angeles County Museum of Art director Michael Govan, as Michael Chow and Alex Israel posed for a photo in front of one of Johns’ bulls-eye paintings.

“I love all art,” mused Kerr. “There’s so much culture in art throughout history and also so much inspiration in modern art. That’s why it’s good to be able to be exposed to so many different types. Actually my son loves it here. I took him to the [Yayoi Kusama] Light Room and he was asking me last night about this museum and when can we go back again. I didn’t have the heart to tell him we were going tonight because he would’ve wanted to come, but it’s past his bedtime.”

During dinner, Ruscha gave a tribute to Johns, who wasn’t able to attend the evening. “When I was a teenager, I opened this magazine up and I see a reproduction of a painting of an American flag and it kind of blew my hair back. It became almost like the atomic bomb of my education in art,” he said. He then noted, “Earlier my wife said, ‘You know, I don’t see any red dots [on any of the paintings] so that must mean that everything is for sale.’”

With that encouragement, after dessert, many guests returned to wander through the galleries, which stayed open until 11 p.m. For those unaccustomed to the late (for Los Angeles) night, there was an espresso bar adjacent to the valet. Among those availing themselves of a to-go beverage was Koons, who ordered a latte.