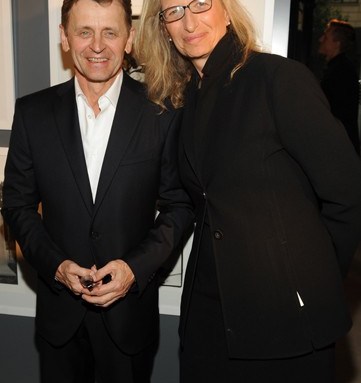 On Tuesday night, Louis Vuitton kicked off its Salons de Louis Vuitton series (wherein the brand invites top clients and friends to have an audience with influential artists) by hosting a dinner with Mikhail Baryshnikov. The dancer’s wife and daughter, patrons of his Baryshnikov Arts Center and Vuitton VIPs gathered on the second floor of the Fifth Avenue flagship for a six-course meal prepared by Veritas chef Grégory Pugin (lemon-marinated langoustine with ossetra caviar, braised Kobe oxtail) and accompanied by rare LVMH wines (a 1999 Cheval Blanc). Dessert was rhubarb compote with marinated strawberries and sweet ginger sorbet, but the real treat was a performance by 19-year-old Kate Davis, a jazz bassist and singer from Portland, Ore., who was discovered by Baryshnikov and played standards mixed with a cover of Rufus Wainwright’s “Leaving for Paris.” WWD sat down with the Manhattan School of Music student, who recently played the Kennedy Center as a Presidential Scholar of the Arts, to talk instruments, dance and very tall shoes.

WWD: Do you come from a musical family?
Katie Davis: Yeah. My parents are hobbyist musicians. My sister’s at Carnegie Mellon pre-college for American music and my younger sister has been playing drums. [Music] was the one thing that came the easiest to me. I started on piano. Somehow I found my way to bass, which is a little strange.

WWD: What was it like playing upright bass in high school? It probably wasn’t the coolest instrument.
K.D.: I didn’t really like high school, especially my high school. I lived in a very white, suburban community with a whole bunch of sports moms, which gets overwhelming. So I did a lot of independent study kind of things so I could be at home and work instead of having to go to school.

WWD: Did you play around town?
K.D.: Yeah, I played a weekly gig at a restaurant and bar in Portland and ultimately, through that and other gigs in the area, I was able to make some money, get a fan base. I released a couple of CDs that people bought. Because I had that opportunity to practice and work and perform for people, I was very comfortable in other situations. So I got involved in some scholarship programs like the National Foundation for Advancement in the Arts, which is how I got the opportunity to meet Baryshnikov and is why I’m here today.

WWD: What was it like when he approached you?
K.D.: Well, I’m not a dance connoisseur by any means, but I knew that he was a big shot.

WWD: What did he say?
K.D.: He expressed a very genuine interest in my music and what I do. For someone like him to come up and say, ‘You’re talented. I was really inspired by what you did.’ And for him to seek me out and speak to me that kindly was very touching, even though I didn’t know a lot about what he had done in his life. So of course I looked it up and figured it all out.

WWD: I asked him if he thought you were nervous about tonight, but he said you were a “cool customer.” Do you agree?
K.D.: I feel like I’m nervous, but in an exciting way. People are listening and I can’t mess up. I have to try really hard and be on my toes, which I already am, [looking at her vertiginous Vuitton heels] but not like that.

WWD: You said earlier that you chose “Leaving for Paris” because Vuitton is a French company. Have you been to Paris?
K.D.: No. Hopefully I’ll get some opportunity over there. I do like Parisian mustard.

WWD: You mean like Dijon?
K.D.: Yeah. It’s very tasty. Escargot — the whole snail thing is right up my alley, so I’d be fine there.