Open to the public through Sept. 15, the exhibition spans 160 years of collaborations from Takashi Murakami to Supreme.

Using the 22,000-square-foot empty retail building it purchased last year for $110 million, which is eventually slated to become an LVMH-owned Cheval Blanc hotel, Louis Vuitton staged a massive new experiential concept, a 10-room, 180-object tribute to its collaborations from Takashi Murakami to Supreme.

“I remember wanting the Murakami as a kid, and obviously I didn’t get to have it, but now to be here with the brand is so cool,” said actress Laura Harrier, bouncing into the hot-pink entrance of the LV-wrapped building for the opening cocktail. 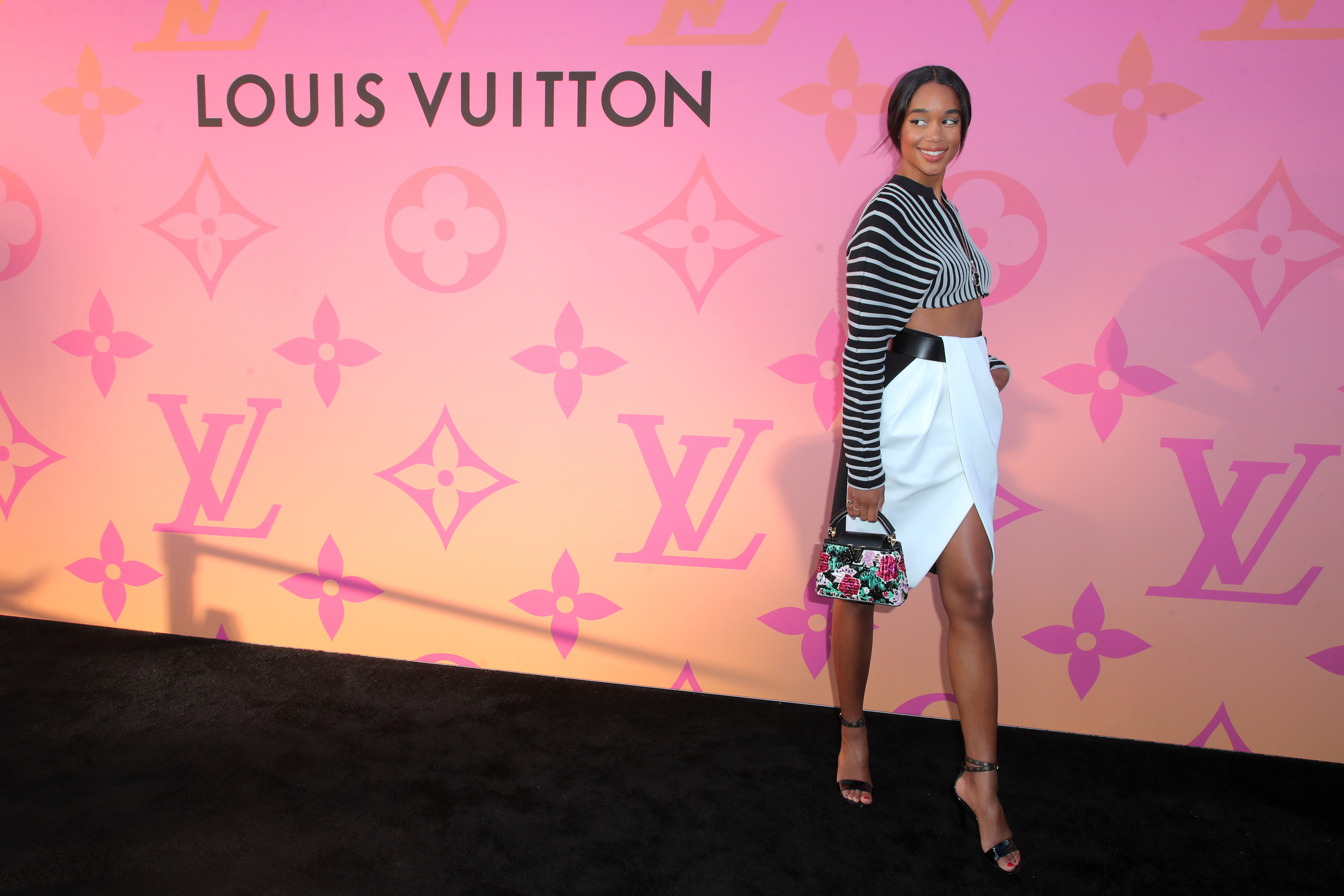 “My Louis Vuitton Supreme wallet I treasure because it’s so hard to get,” added Millie Bobby Brown, dressed in a pink satin skirt and black bolero, before entering the first room of the brand come-to-life.

Open to the public through Sept. 15, the exhibition spans 160 years. There are L.A.-specific historical LV pieces (an Alzer suitcase designed for the 2006 Wes Anderson film “Darjeeling Limited,” for example); interpretations of the monogram on bags, scarves and more by fashion designers and artists from Azzedine Alaïa to Zaha Hadid, and art-inspired runway looks by designers Marc Jacobs, Virgil Abloh and Kim Jones

“We’ve innovated in every room. L.A. gets the world exclusive…we want to take this on the road,” said Louis Vuitton chief executive officer Michael Burke, walking the party with Delphine Arnault, and stopping to greet architect Frank Gehry. 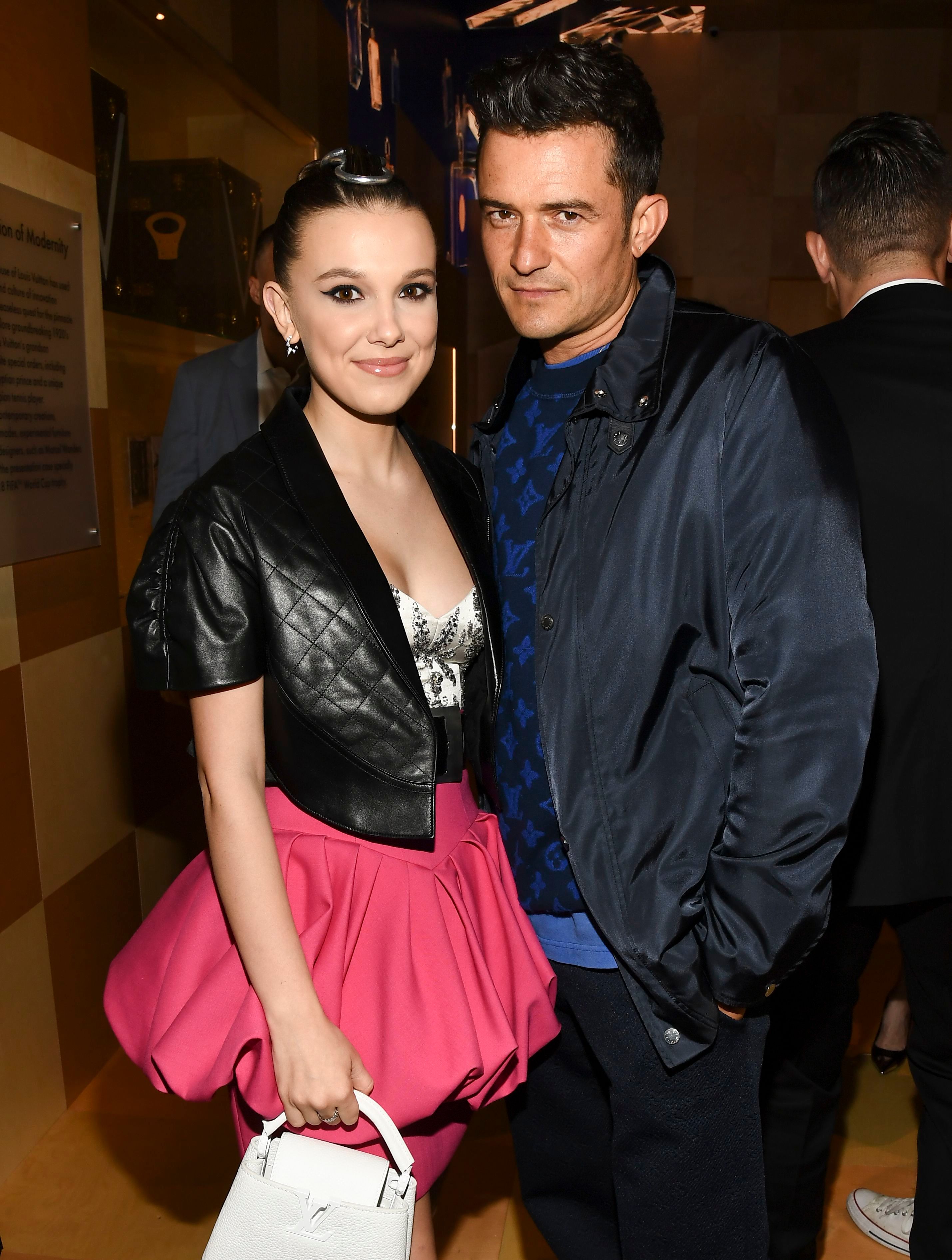 Of particular interest to the L.A. crowd was a trophy room of 38 red-carpet gowns designed by Nicolas Ghesquière for Julia Roberts, Michelle Williams, Lady Gaga and others, with photos of the celebrity wearers displayed alongside them. “I have great memories of this one,” said stylist Petra Flannery of the gilded, gold chain-decorated gown worn by her client Emma Stone to the 2018 Met Gala. “We added a little detail to the sleeves. Getting to do anything with Nicolas is such a dream. He’s a true artist.” 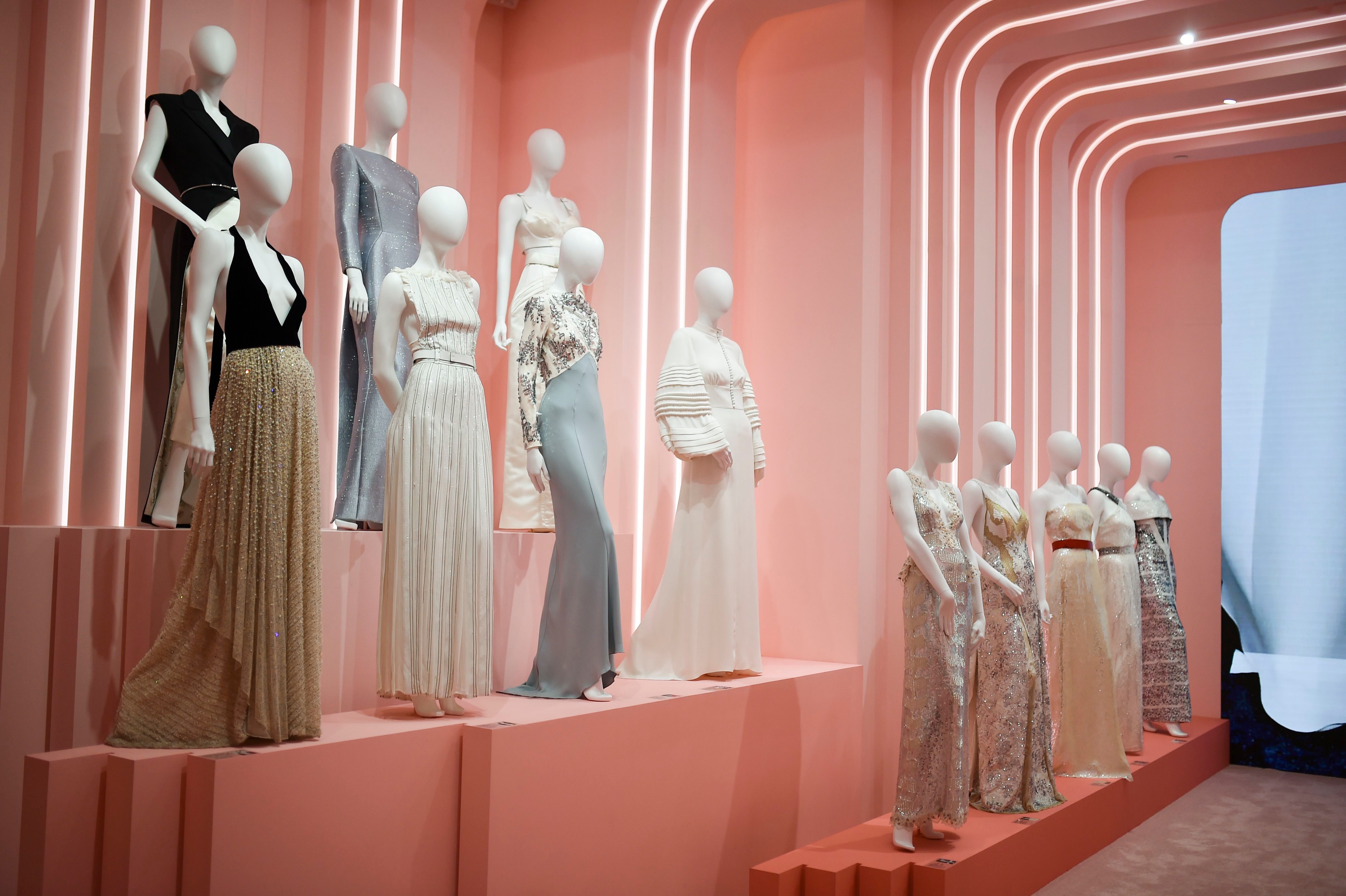 For its latest artist edition, pegged to the exhibition, Louis Vuitton tapped six contemporary artists — Sam Falls, Urs Fischer, Nicholas Hlobo, Alex Israel, Tschabalala Self and Jonas Wood — to put their own spin on ladylike Arty Capucines bags, in numbered editions of 300, all $8,600, and all already sold out. 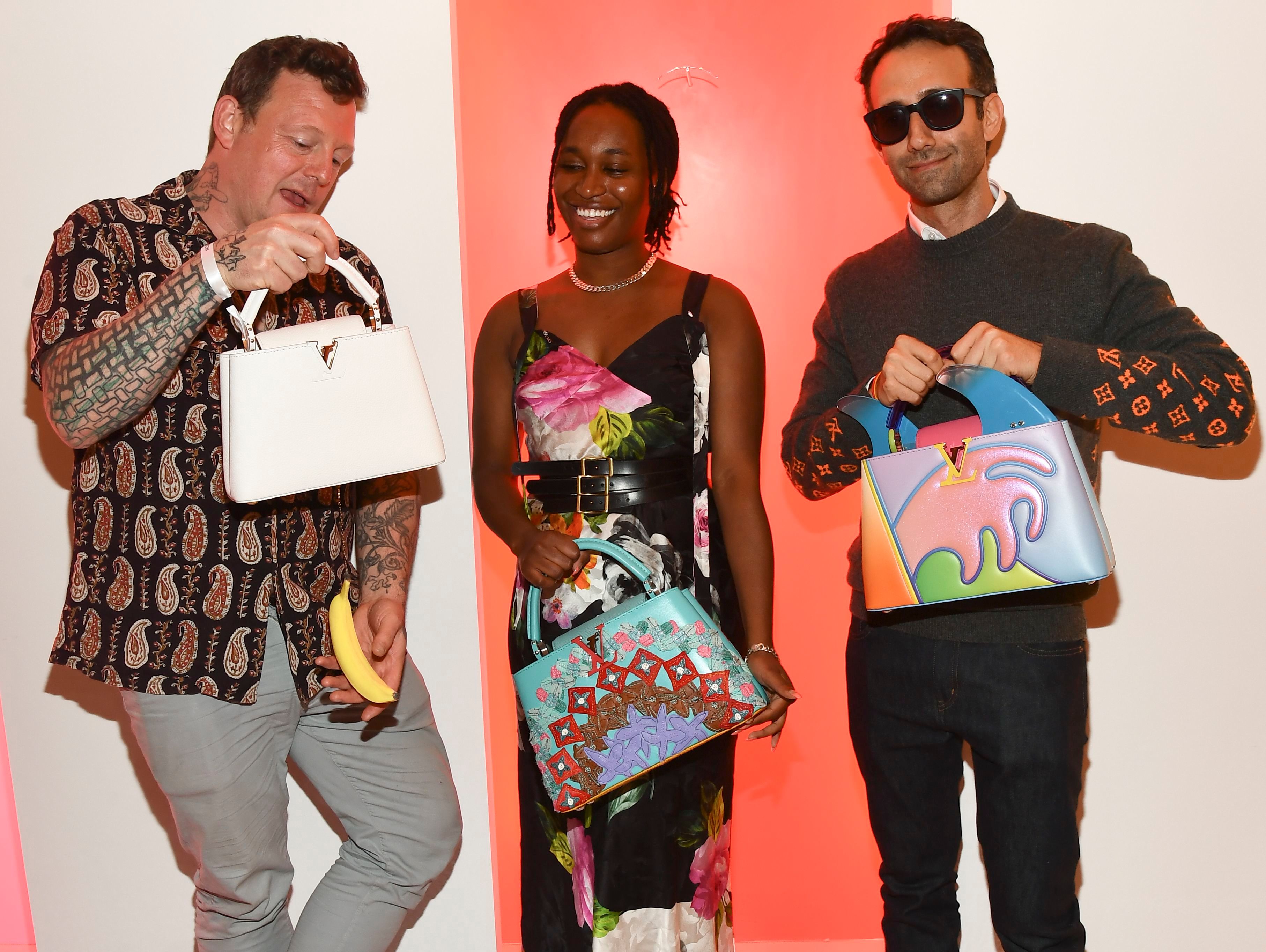 “Louis Vuitton came to my studio and left a bunch of materials for me to use…leather, pony, exotic skins,” said Self, a New Haven, Conn.-based painter best known for her depictions of black female figures using paint and fabric. Instead of doing anything figurative, “I broke down the various elements of the logo, isolated them into four parts and reconstructed them using my style of collage and assemblage of textiles.”

“I’d been making wave paintings at the time I was asked to participate in the project so it was natural to take what I was doing in my studio and apply it to bags,” said Israel of his striking wave bag, with shark fins protruding from the top. “The bag design was about reflecting the California spirit and wanting to make something that emitted good vibrations,” added the L.A. native, who also collaborated with Vuitton on fragrance packaging, and with LVMH-owned Rimowa on a suitcase design. 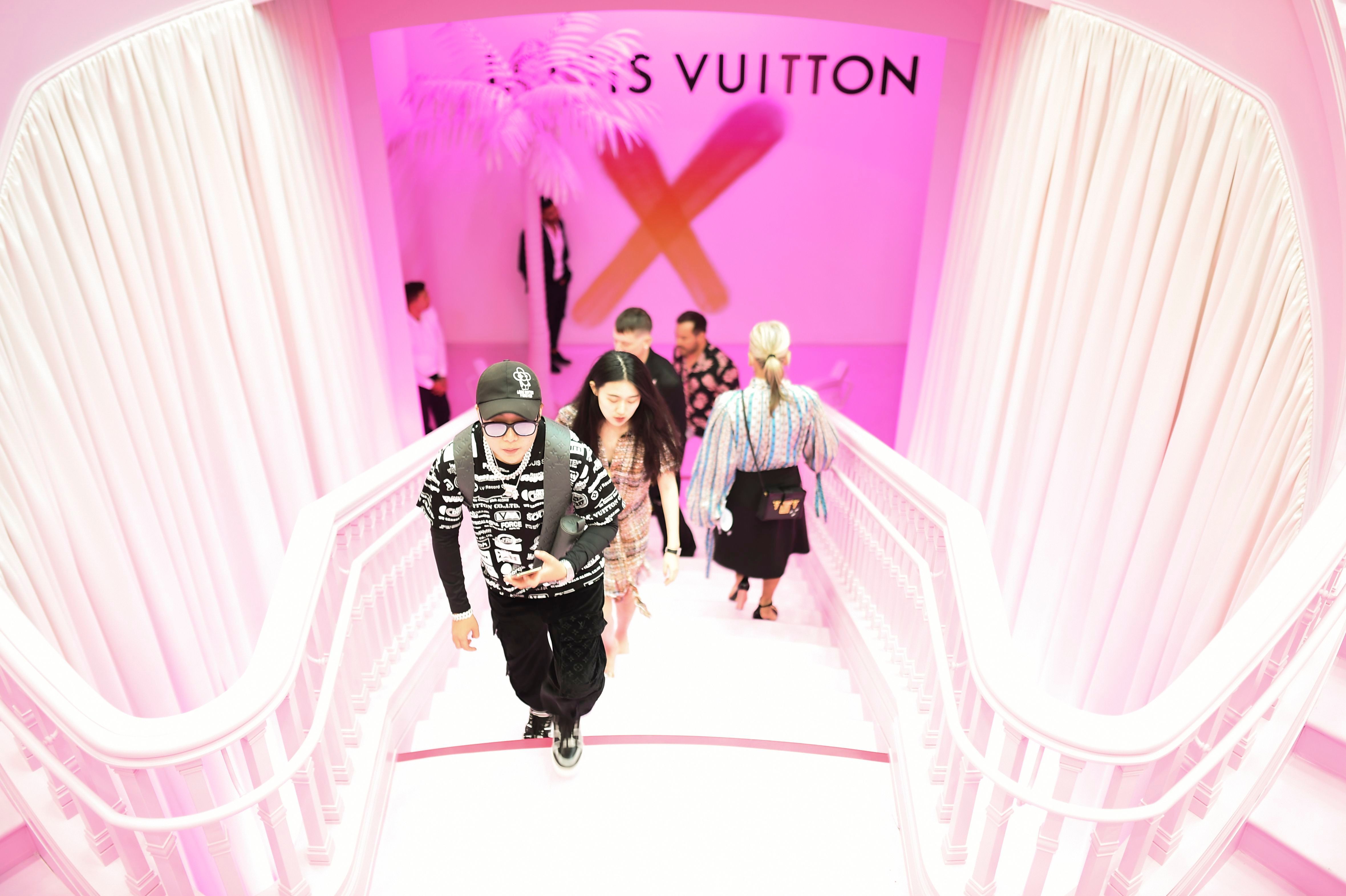 Up the Instagrammable pink staircase with palm tree accents, the mega Louis Vuitton X gift shop was party central, with palomas, matcha tea and avocado-and-caviar tostadas on heavy rotation and guests (more than 800 of them) lingering to browse and mingle. 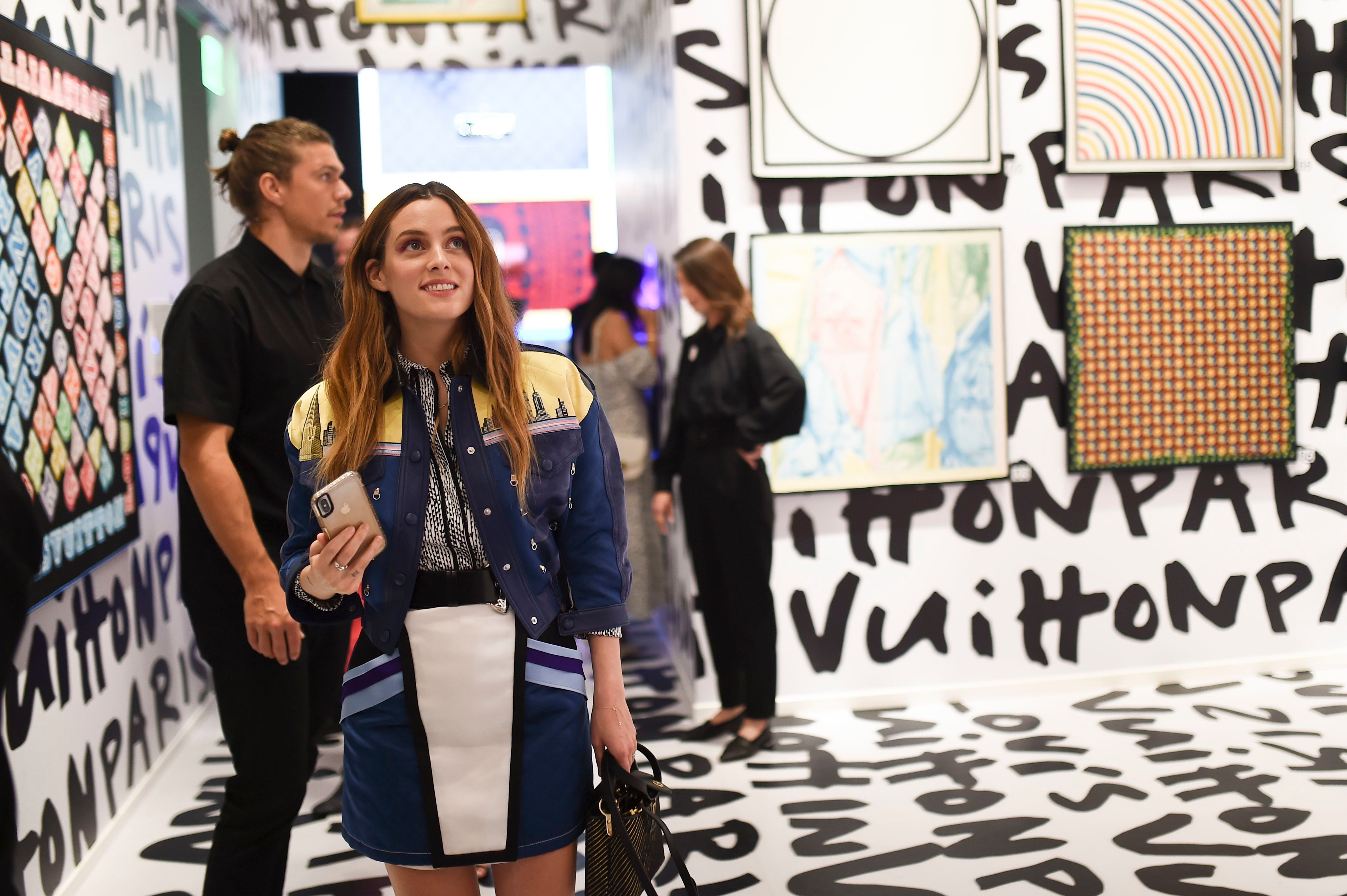 Curated by Sarah Andelman of Colette fame, the merchandise mix included everything from a $88,500 Tokujin Yoshioka blossom stool, to the LV monogram car paperweight that a pink diamond-grill sporting Jaden Smith was contemplating for a cool $1,910. Even the limited-edition Louis Vuitton X luggage tag will set one back $250. No cheap souvenirs here. 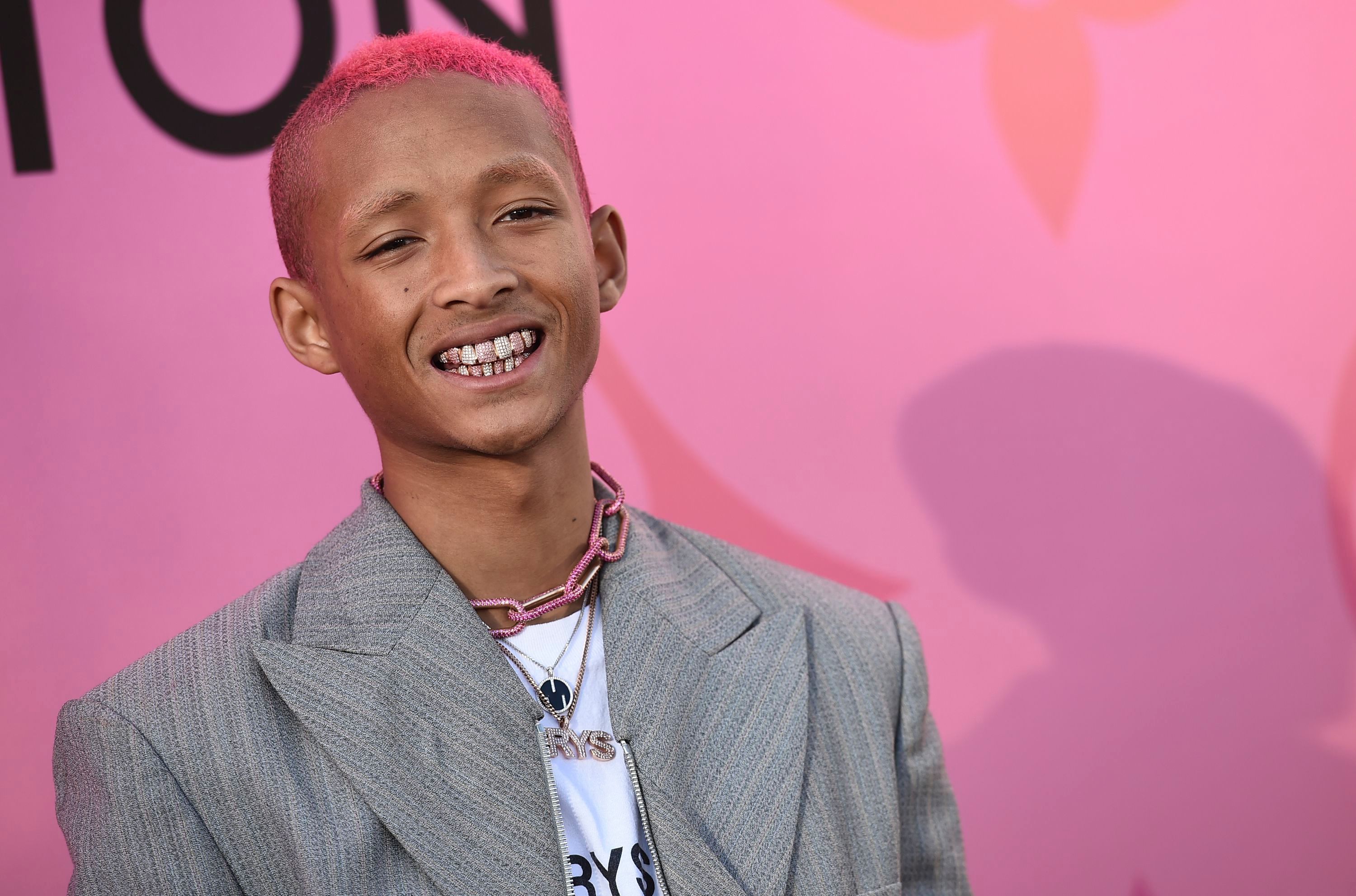 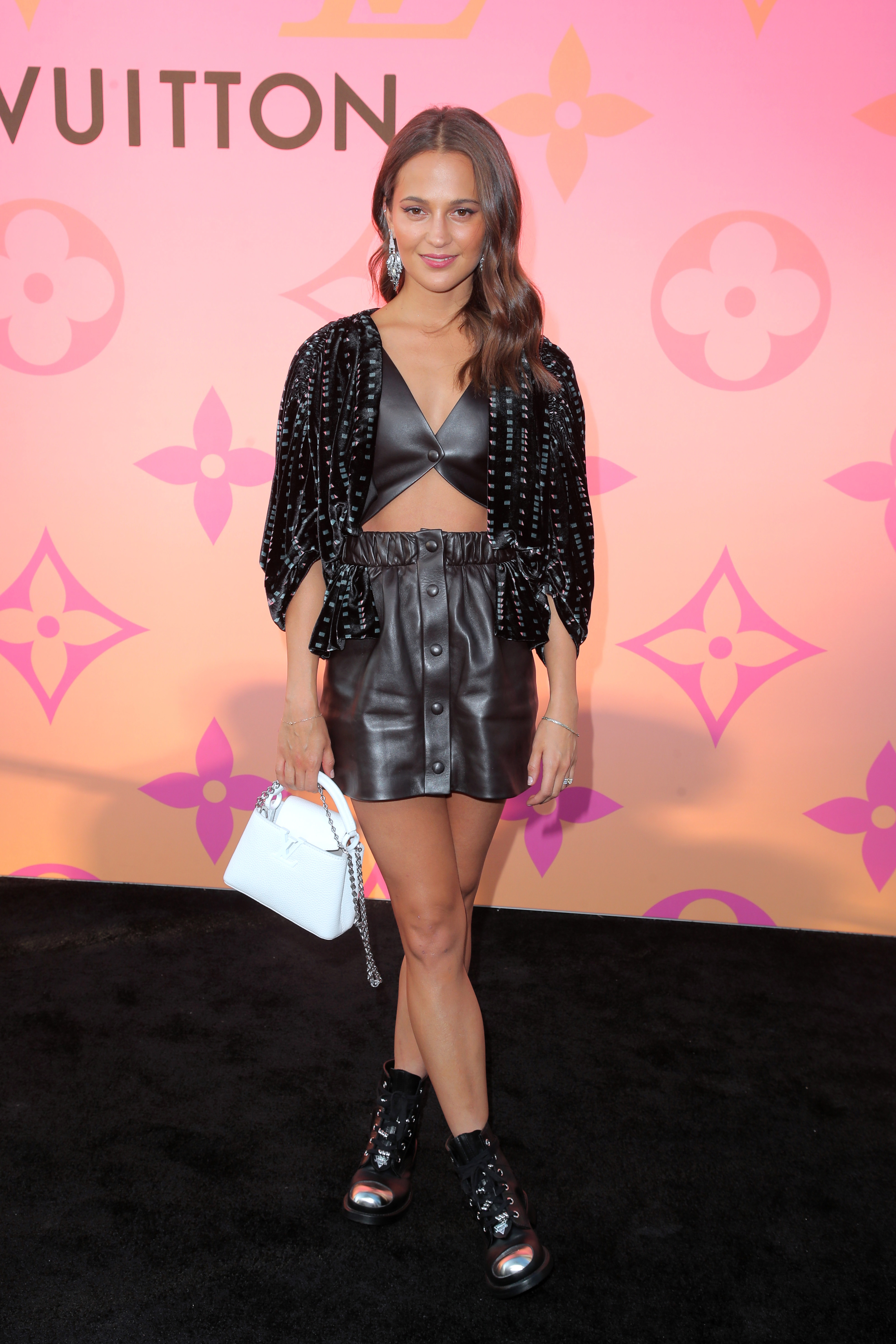 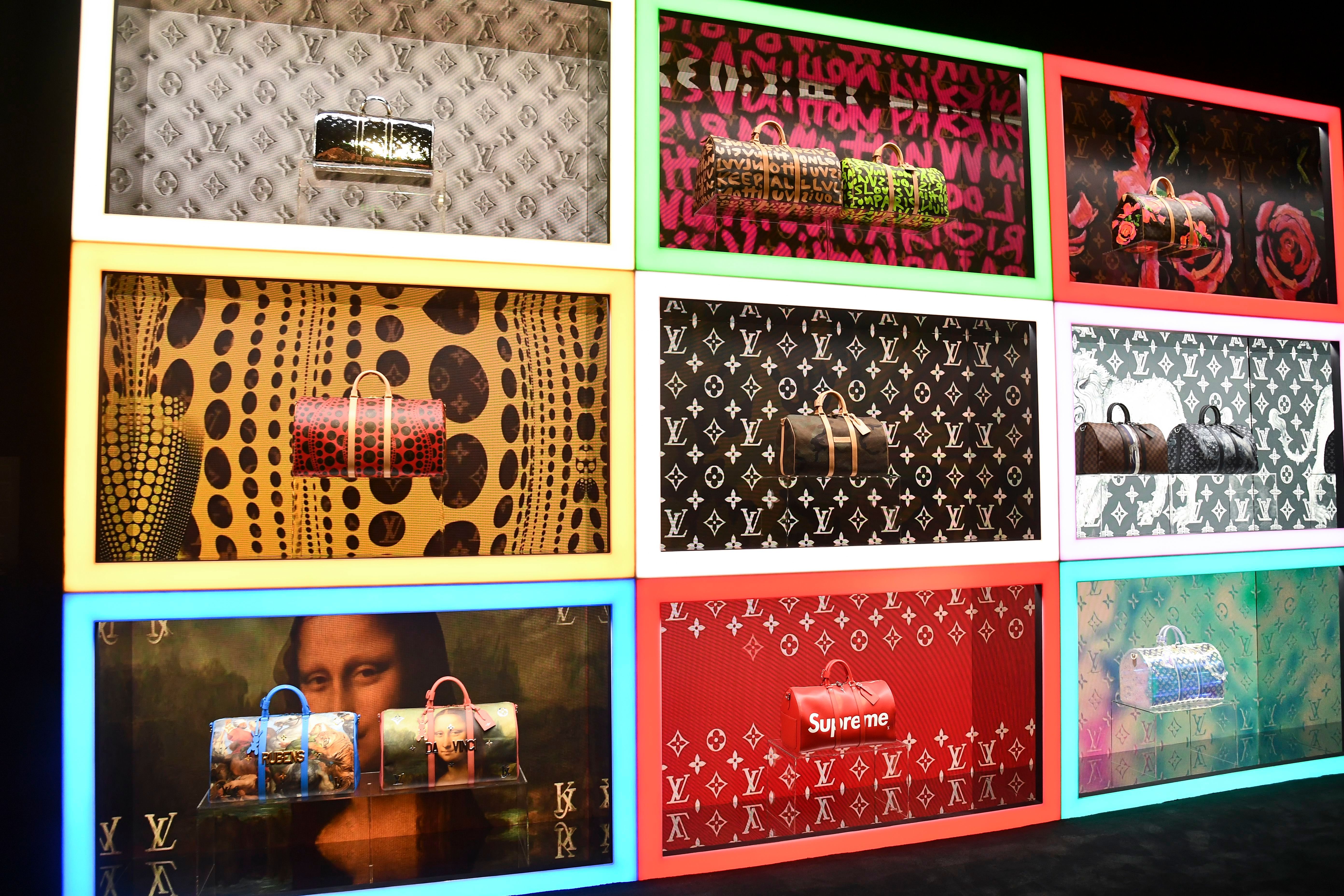 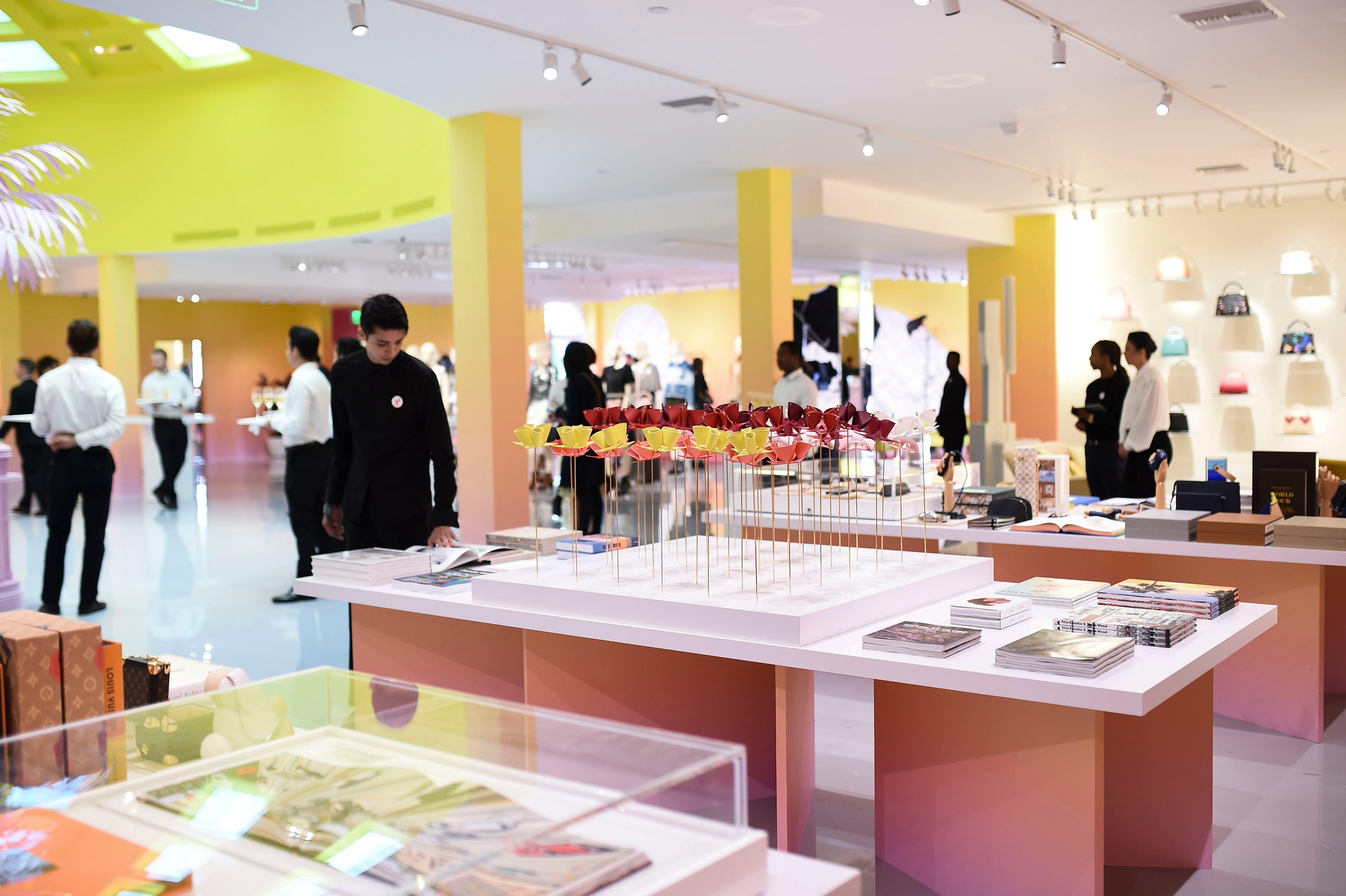