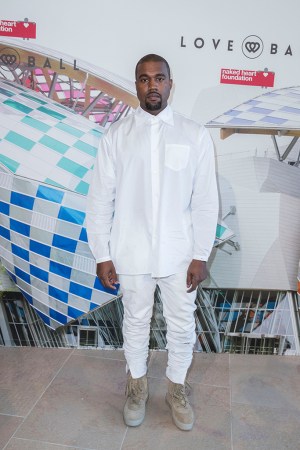 YOU GOTTA HAVE HEART: Love was in the air at the fifth edition of the Love Ball charity gala, held at the Fondation Louis Vuitton in Paris on Wednesday. Titled “The Art of Giving,” the event kicked off with cocktails where guests including Laetitia Casta, Riccardo Tisci, Bella Hadid, Christian Louboutin and Mario Testino sipped Champagne and perused major contemporary art works that were later auctioned off live by Sotheby’s. They included Zhang Huan’s “Giant No.3” (1965), a colossal figure covered in cowhides.

Kanye West, among the first VIPs  to arrive, was on his best behavior. “Very much so, thank you,” he demurred when asked if he was feeling the love. Sweeping into the venue moments later, the night’s hostess, Natalia Vodianova, in a graphic red, white and black dress by Louis Vuitton, beamed: “I’m feeling the love of my guests.”

“Do I feel the love tonight? I’m not quite sure what I’m feeling tonight. I’m feeling my waistband’s a little tight,” quipped Marc Jacobs.

As the guests flowed in, a pony-tailed Adrien Brody was busy admiring a school of paper fish suspended from the ceiling in the entrance hall. “Aren’t they beautiful, they’re not mine, but they’re amazing,” he said, before sharing some insight into his own artist life. “Art allows me a level of creative freedom that I don’t necessarily have as an actor. It feeds me regardless of accolades, regardless of sales, regardless of how it does. It really is something that has brought such happiness into my life,” said Brody, who is about to stage a solo exhibition of new works from his “Hooked” series, coincidentally themed around fish, at the Galerie des Lices in Saint-Tropez. “It represents, well, many things,” he mused.

Paris Hilton arrived in a sequined dress from Ibiza and had lost her luggage. But she was ever the professional. “I just released my 20th fragrance, Gold Rush, about three days ago; I have my residency at Amnesia in Ibiza every Saturday through to September — it’s the best club in the world; 17 product lines; my new hotel’s coming, [and] an album…so, very busy,” she said, pausing to admire the space. “It’s incredible, it’s so futuristic and so out-of-the-box and different and unique. That’s what Louis Vuitton is about, and they’re also legendary and they’ll be around forever,” she said, sashaying off to the black-tie dinner. The night’s entertainment included a world premiere of a new multimedia ballet featuring Bolshoi soloists Kristina Kretova and Andrei Merkuriev.