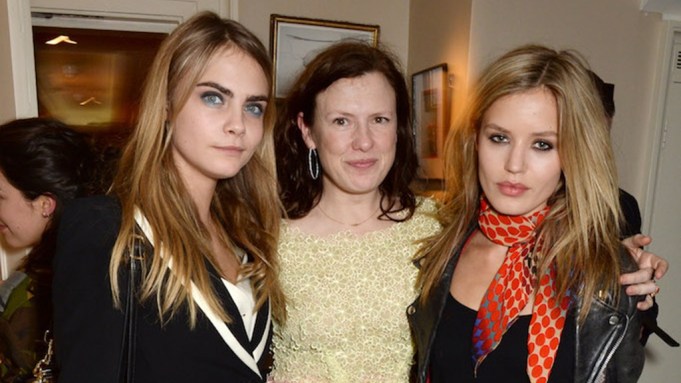 SOUL TO SOLE: Love magazine marked the launch of its Remix collector’s issue on Monday night at a London party hosted by Katie Grand, Katie Hillier, and Luella Bartley at George in Mayfair. Guests included Christopher Kane, Georgia May Jagger, Henry Holland, Lulu Kennedy, Otis Ferry, Tallulah Harlech, Tiphaine de Lussy and Cara Delevingne, who clearly takes her mealtimes seriously. She was heading off to dinner at the Wolseley, and was pre-ordering Dover sole on her iPhone as she went. Models Edie Campbell and Lily McMenamy were still sporting their blue eye liner from the Giles show. Campbell was wearing a white leather motocross jacket and pants straight off the catwalk.

Model and warbler Karin Elson related how she’d entertained the crowds at Harvey Weinstein’s post-BAFTA party on Sunday night, where she got on stage at the last minute and belted out “Take Another Little Piece of my Heart.” “I had the best night ever,” she said.

Two of Sibling’s designers, Cozette McCreery and Sid Bryan, were dissecting the footwear malfunction that took place at their show the previous day, and how they placated model Phoebe Collings-James who fell after her heel got caught up in her crochet dress. [She ended up tossing her shoes on the runway and walking barefoot the rest of the way]. Sibling is the European finalist in the International Woolmark competition, so the designers are to show six looks in Milan on Friday. These include a pixillated, hand-intarsia of a portrait painted of McCreery by the late Lucian Freud, one of his last pictures. “I was Bella [Freud’s] assistant for many years,” she said, referring to the fashion designer and a daughter of Lucian Freud. “I sat for him for nine months… He named [my portrait] ‘Irish Woman on a Bed.'”